Is Pakistan in talks with China for long-range SAMs?
February 27, 2020 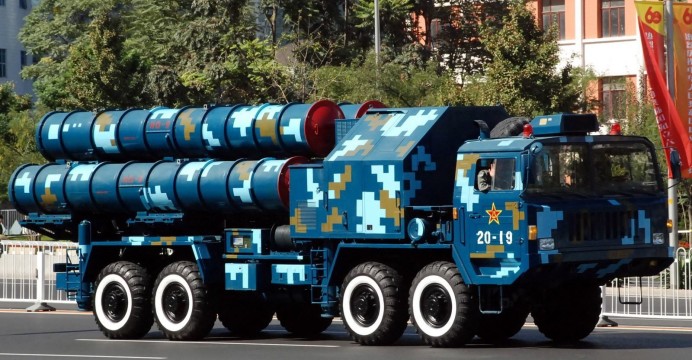 The Chinese HQ-9 long-range surface-to-air missile (SAM), which was the original winner of the T-LORAMIDS program.
Daily News
May 15, 2016 Bilal Khan -

Is Pakistan in talks with China for long-range SAMs?

During a high-profile meeting with two leading Chinese defence vendors, China Aerospace Science and Industry Corporation (CASIC) and China Precision Machinery Import and Export Corporation (CPMIEC), the Pakistani prime minister noted a potential air defence deal in the making with China. According to the Daily Times, Nawaz Sharif stated ‘the decision for induction’ would be made upon receipt of a ‘complete proposal’ from CPMIEC.

It is not clear which CPMIEC air defence system Nawaz Sharif was referring to, but it is worth noting that the Pakistan Air Force (PAF) and Pakistan Army have already ordered HQ-16 and FM-90 surface-to-air missile (SAM) systems, respectively. The HQ-16 is a medium-range SAM system with a maximum range of 40km, and maximum intercept altitude of 10,000 metres. The FM-90 (also known as the HQ-7) has a range of 15km, and a maximum intercept altitude of 6000 metres. The Pakistan Army inducted the FM-90, and three HQ-16 batteries were ordered in late 2014.

Granted, the PAF and/or the Army could be awaiting a new proposal regarding the HQ-16 or FM-90, but it is also possible that the long-awaited push for a long-range SAM system is finally underway. At present, Pakistan’s integrated air defence system (IADS) is comprised of short and medium-range SAMs, with the MBDA Spada 2000 Plus possessing the most range (of over 20km). Unfortunately, the situation on the naval front is a bit worse, the FM-90 and LY-90 systems in use by the Pakistan Navy’s F-22P and Type-21 frigates, respectively, offer less than 20km in range each. The forthcoming HQ-16 will be a significant jump in Pakistan’s IADS coverage by raising its medium-range umbrella.

Pakistan sought a long-range SAM system since the early 2000s, when it was reportedly in talks with China for the acquisition of FT-2000 SAM systems (in response to India’s Phalcon AEW&C purchase from Israel). The FT-2000 is (or at least was) an export-grade HQ-9 tipped with an anti-radiation seeker (which could be used to target airborne radars). Nothing seemed to had come of those talks. In 2013, Pakistan opened talks with China for the purchase of HQ-16 and HQ-9 systems; Pakistan ordered the HQ-16 in late 2014.

Public details about the HQ-9 are scarce, but analysts generally believe it is derived from the Russian S-300PMU, a popular and widely adopted long-range SAM system, with Iran being its newest user. The HQ-9 system comprises of a HT-233 passive electronically-scanned array (PESA) radar, which is used to guide the HQ-9’s missiles to their targets (i.e. semi-active radar homing). An active electronically-scanned array (AESA) radar in the form of the Type 305 was also spotted with the HQ-9 system. The added inclusion of the Type 305-series would infuse the HQ-9 system with highly improved electronic counter-countermeasure (ECCM) capabilities against enemy electronic warfare (EW) jamming.

In terms of the missile, it is believed that the HQ-9 can reach up to 200km, but the export-grade FD-2000 is limited to 125km. The missiles use semi-active radar-homing (SARH) guidance, meaning, they depend on the HT-233 (or Type 305) radar to illuminate the target until impact. There have been reports of active radar-homing and imaging infrared-tipped HQ-9 versions being under development.

Last year, Turkey selected the HQ-9 as part of its own long-range SAM requirement, CPMIEC effectively beat leading Western competitors such as Raytheon and MBDA in order to secure the potential contract. Unfortunately, pressure from the U.S. and NATO apparently pushed Turkey to walk away from the table, prompting it to instead to tap into its own defence industry (i.e. Roketsan) as a means to develop a long-range SAM system. But seeing a NATO power with purchasing power and options select the HQ-9 was a major vote of confidence for CPMIEC and the HQ-9.

Even if one were to assume that Pakistan will acquire the FD-2000 (which has a range of 125km), there is no doubt that the system’s inclusion into Pakistan’s IADS would amount to a much needed and solid upgrade. Pakistan does not possess long-range air defence coverage (its medium-range gap is only now being addressed via the HQ-16). The introduction of the HQ-9 will offer Pakistan additional breathing space in regards to its principal aerial threats. The HQ-9 is also a scalable system, Pakistan could continue upgrading the system’s radars and missiles in the coming years.

Of course, this coverage is from land, there are no firm air defence improvements in place for Pakistan’s maritime theatre just yet. This would require new frigates with vertical launch systems (VLS).

We must caution however that the CPMIEC proposal could refer to other air defence solutions as well. As noted earlier, Pakistan could be inviting a proposal in regards to expanding its medium-range coverage via the HQ-16. But given that the proposal was noted by the Prime Minister, the idea of it being in regards to the HQ-9 or FD-2000 should not be ruled out.

Last month, the Pakistani defence minister, Khawaja Asif, claimed that Pakistan was also exploring the possibility of acquiring SAM systems from Russia. We believed that short-range systems – such as the Pantsir S2 – were on the cards, but Russia may not be the only option being explored. Pakistan could also acquire promising short-range systems from South Africa, Turkey and China as well. The introduction of the HQ-9 (long-range), HQ-16 (medium-range), and a next-generation short-range SAM in the next few years would amount to an impressive air defence overhaul (which should also see new air surveillance radars on land as well as proper naval development as well).