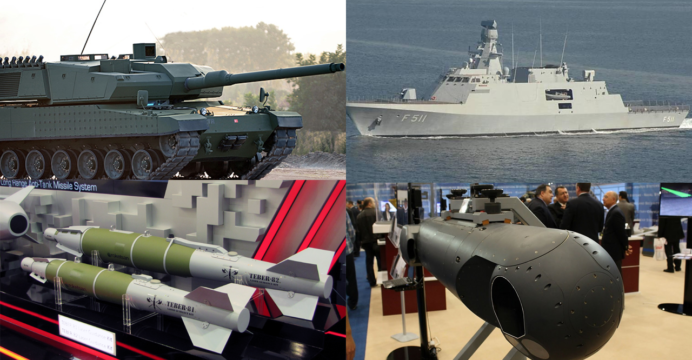 For the past 10 years, Turkey and Pakistan have built a steady foundation for extensive cooperation in a number of different areas related to defence and security. Not only have the two sides exchanged goods, but they have regularly trained with another in exercises (e.g. Anatolian Eagle and Indus Viper), but the two sides have also signed onto a bilateral pilot training and exchange program in 2015.

The Turkish defence industry is vast and competent, and as such, it offers the Pakistani armed forces many possible areas of armament acquisition and development.

At one point, the Pakistan Army was interested in the T-129 ATAK dedicated attack helicopter, but high costs and America’s unwillingness to pass export clearances for the powerplant pushed the Army away (to acquire the AH-1Z Viper from the U.S. directly). In recent months, there have been reports of the Pakistan Army being interested in the Otokar Altay main battle tank (MBT), though it may be more eager to acquire some of the Altay’s subsystems (e.g. active protection suite) for use on the al-Khalid and possibly forthcoming Haider MBT programs. The Pakistan Army also previously bought towed howitzers from the Turkish armament manufacturer MKEK.

The Pakistan Air Force (PAF) could also tap into Aselsan’s expertise in developing and producing electronic warfare (EW) and electronic countermeasures (ECM) solutions for support on the JF-17. Perhaps the PAF could even consider acquiring the ASELPOD to meet the JF-17’s air-to-ground mission needs. Roketsan could be consulted for sourcing laser-guided bomb (LGB) kits for Mk-81 and Mk-82 series general purpose bombs (GPB). TUBITAK SAGE’s HGK precision-guided bomb (PGB) kit for Mk-84 GPBs could be an option as well. Pakistan could consider the Cirit laser-guided rocket and Mizraak anti-tank guided missile (ATGM) as well. Overall, there are no shortage of options in the area equipping Pakistan’s aerial assets.

There are even numerous air defence options as well. For example, Pakistan could consider the Roketsan Hisar-series of short/medium-range surface-to-air missiles (SAM). The PAF could potentially take a look at the Aselsan Kalkan 3D phased-array radar as a possible option to replace its ageing Siemens Mobile Pulse-Doppler Radars (MPDR).

The Pakistan Navy presently operates two MRTP-33 fast attack crafts (FAC). In the late 2000s and early 2010s, the Pakistan Navy had sought to acquire a corvette design from Turkey, but severe economic issues forced the Navy step back from the idea. In place of the corvettes, the Navy began inducting Azmat-class FAC from China. In the long-term, the Pakistan Navy could potentially revisit the idea of exploring Turkish corvettes. If and when the Pakistan Navy is able to place new generation multi-mission frigates into its acquisition pipeline, it could consider acquiring command and control as well as combat management systems from Havelsan (e.g. GENESIS).

Although Pakistan has many options it could pursue in Turkey, tight funding will limit the extent Pakistan can engage with Turkey. At present, Pakistan’s focus will be on achieving existing operational objectives, such as imbuing the JF-17 with credible precision-strike capabilities. As a result, we may see a focus (at least in the short-term) on specific – and comparatively lower-cost – solutions, such as the ASELPOD and potentially air-to-ground munitions from Roketsan and TUBITAK SAGE.

Besides direct acquisitions, Pakistan could greatly benefit from Turkey in the area of improving its own defence industry, specifically in terms of upgrading existing facilities, such as Heavy Industries Taxila (HIT), Karachi Engineering & Shipyards Works (KSEW), Air Weapons Complex (AWC), etc. Through its technology transfer agreements as well as recent indigenous developments, Turkey has incredible exposure to recent developmental processes in the West. While not tangible like specific systems, cooperation in the form of learning, transferring expertise, assisting with manufacturing and assembly processes will offer considerable benefit to Pakistan in the form of long-term cost savings, enhanced efficiency, and ability to produce more complex systems.