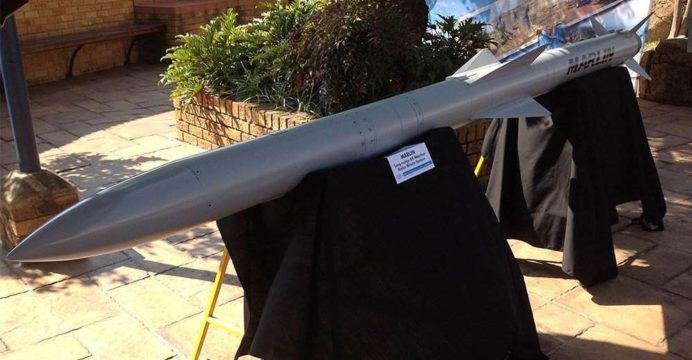 Pakistan ought to consider the Denel Dynamics Marlin missile program

One of the central driving aspects of Pakistan’s armed forces procurement strategy is the need to avoid risks, complications, and added costs where unnecessary. It is for this reason that the vast majority of the country’s defence equipment – including those produced locally – are of foreign (mostly Chinese) origin.

Some are evidently straightforward imports, such as the Burraq unmanned aerial vehicle (UAV) and Barq laser-guided air-to-ground missile, and others are heavily customized and tuned-up off-the-shelf designs, such as the al-Khalid main battle tank (MBT). In exceptional cases, unique designs are developed with heavy Chinese assistance, such as the JF-17 multi-role fighter and potentially the Navy’s new submarine.

To be fair, this is not a bad strategy. A country’s defence requirements are never static, threats will keep changing and requirements will keep escalating. As a result, a developing country with scarce resources for high-tech armaments needs to be very pragmatic in its defence procurement strategies. The prospect of being sunk by a program’s escalating costs and restrained by its delays could be incredibly damaging if the financial cushion to sustain such obstacles are not present.

However, there is a cost to such an approach. It maintains dependency on external suppliers. It threatens disincentives towards domestic development efforts. It pushes the prospect of indigenous work further into the future, and in some cases, threatens to eliminate the incentive to engage in domestic research and development at all. For these reasons it becomes imperative for Pakistan to not take its external suppliers for granted, even in the best of conditions.

Even if the path to buying a readily available solution is present, in some cases it may be a viable practice to trust in the riskier and costlier route. This is especially true in areas that are technologically sensitive in nature, especially for vendors who are looking to maintain dependency in their markets as a means for recurring income, or to keep their cards as close as possible to their chests, so as to ensure enemies do not have access to sensitive information. Others will simply demand a high price for valuable technology and expertise, so as to offset the cost of losing a customer who may use that expertise to develop domestically sourced solutions. Of course, that is assuming the technology transfer is comprehensive.

One such area is missile technology for air-to-air and surface-to-air applications. On the surface, it may seem like Pakistan has no shortage of options, at least from China anyways. The SD-10 beyond-visual-range air-to-air missile (BVRAAM) has reportedly emerged as a good solution for use on the JF-17, and the Pakistan Air Force (PAF) could bank on its long-enduring relationship with Beijing to acquire next-generation designs, such as an export variant of the PL-15.

But the truth is that there is no export version of the PL-15, at least for the time being. There probably will be, but that is an assumption, and not necessarily a fact. Not every Chinese system has an export variant. From China’s point of view, the PL-15 would be its premium air-to-air missile, and potentially a valuable asset that ought to be sat on for a few years before made available for export. Meanwhile, India has the nearing prospect of acquiring the MBDA Meteor, a next-generation BVRAAM with a particularly high kill-probability rate. Granted, one can argue that China has a strategic interest to specially equip Pakistan, so as to enable Pakistan to relieve some of the pressure India is trying to apply on China. Even if this were to occur (a possibility), it does not negate the underlying problem – i.e. the fact that Pakistan has to anxiously wait for an external source in order to pursue its own needs. Even if one were to accept this line of reasoning, the prospect of actually sourcing next-generation BVRAAMs domestically would be a much more preferable outcome.

Of course, Pakistan does not have the foundation nor expertise to engage in such a program on its own. But it does have an opportunity to build that necessary groundwork. Fate would have it that there is an experienced vendor in the world willing to develop next-generation air-to-air and surface-to-air missiles (SAM), and to part ways from the technology and expertise used to develop them.

That vendor is Denel Dynamics, a South African firm. In exchange for funding the development of the Marlin, a program seeking to develop next-generation BVRAAM as well as SAM technology and solutions, the end-user could receive a heavy infusion of valuable technology and technology expertise. Above that, the buyer would acquire a design that it could freely integrate and use with the platforms of its choice.

By investing in the A-Darter 5th-generation within-visual-range air-to-air missile (WVRAAM), Brazil was able to push forward with its own seeker and electronic counter-countermeasures (ECCM) technology. It will also produce the A-Darter domestically. At this time, the A-Darter is also in the running for the PAF’s requirement of a 5th-generation WVRAAM for use on the JF-17 Thunder.

The Marlin (as an air-to-air missile) is expected to have a maximum range of 100km. The design’s dual-pulse rocket will also be purposed for SAM applications as well, likely along the trajectory of the Israeli-Indian Barak-8, which will equip various surface combatants in service with India and Israel. Given that Denel Dynamics already has a 60km-range SAM under development (i.e. Umkhonto-R), it is reasonable to project the Marlin SAM to at least begin as a short to medium-range (25-40km) system. But it is important to note that the dual-pulse rocket technology the Marlin uses could be further developed over time, thus opening up the prospect of a medium to long-range (60-90km) system.

It is evident that engaging in such a program would not only benefit the PAF, but it would be of value to the Pakistan Navy and the Pakistan Army. In fact, there are layers of results that could be accrued: First, the PAF would have a next-generation BVRAAM. Second, the Navy would have access to a SAM system that it could use aboard surface combatants such as frigates and corvettes. Third, the Army would have a SAM system as well, one that could be developed over time into a medium to long-range system. Fourth, Pakistan would be in possession of valuable dual-pulse propulsion, seeker, and ECCM technology, which it can use as a foundation to indigenously develop next-generation solutions.

There is a cost. The A-Darter program cost Brazil and South Africa $130 million U.S. India and Israel agreed to $330 million U.S. in order to develop the Barak-8 SAM. Investment in the Marlin could amount to several hundred million dollars. It would be unfair and disingenuous to suggest that the amount required would be minor or inconsequential.

However, does Pakistan have to be the sole funding partner? Not necessarily. It is possible that Pakistan’s funding could serve as motivation for others, such as Turkey, to co-fund as well. Turkey has a higher incentive at this point to acquire the same technology for its own uses, and it would not necessarily be averse to having Pakistan as a co-funding partner. Each partner could emerge with total access to the technology as well as the means to produce the systems domestically and to use them on their respective platforms. In fact, given the benefits that could be accrued from the program, the PAF does not have to be the sole backer within Pakistan. Each of the service arms ought to have an interest in the program, as should the country’s R&D players (e.g. NESCOM, AWC, SUPARCO, etc). There is potential here for cost-distribution, even within Pakistan (which would be helpful if Pakistan has to fund the program alone).

There are several ways to detract this idea.

First, it is an expensive idea, one fraught with substantial risk and complexity. However, the payoff of acquiring highly valuable technology that could be scaled for a wide range of strategically important applications. Moreover, Denel Dynamics is a seasoned vendor, it has the Marlin is actually a culmination of development going back 15-20 years, and the company has just proven that it could deliver the A-Darter – a 5th-generation WVRAAM akin to the AIM-9X and IRIS-T – if given the funding.

Second, one will argue that it would be more affordable to simply wait for China and the PL-15, or perhaps even an upgraded variant of the SD-10. To be frank, to suggest such an idea would mean making the assumption that the PL-15 would be exported in some shape or form. At this point, there is nothing to suggest that it will, not every Chinese system is made available for export. Granted, China could make some exceptions on the basis of pursuing its strategic interests, but this does not resolve the issue of having to depend on an external source. Alternatively, China could also offer a heavily upgraded version of the SD-10, and that would be a great option for the interim, but it does not compensate for having a next-generation design – i.e. a design that can be developed upon for decades into the future.

Third, one will note that Pakistan is a relatively risk-averse entity, one that will prefer to wait it out for the Chinese. In many cases, being risk-averse is a virtue, but there are situations where certain technology will not easily be acquired. The MBDA Sea Ceptor would be an ideal short to medium-range SAM system for use on the Pakistan Navy’s F-22P frigates. Unfortunately, one can without a doubt expect regulatory hurdles to get in the way of making such an acquisition feasible, and if not that, then certainly expect cost. Why not utilize Denel’s expertise to develop a comparable solution without any artificial limitations to performance? Why not call upon Denel to enable Pakistan to actually produce the system? The JF-17 has given the PAF a measure of freedom and authority that it has not had with any other platform, so why is this idea not being expanded to other critical aspects of the armed forces?

Fourth, South Africa requires funding and time to develop, others already have solutions available on the shelves. This argument completely omits the fact that in-exchange for the funding, Pakistan would receive a measure of technology transfer that Denel’s competitors will not offer. Pakistan can optionally tie its funding to achieve specific objectives, such as having a SAM system similar to the Barak-8, i.e. a medium to long-range system that is compact and light enough to be fit on the F-22P. Pakistan’s national funds are limited, why not use them to not only acquire a product, but acquire the means to produce it, to design it for multiple mission roles, and build expertise that can be used to indigenously source future solutions?

The late 2000s had put a dampener on Pakistan-South African defence relations (for multiple reasons with both sides being responsible). However, when the Chief Project Director of the JF-17 program noted the A-Darter as a contender for the Thunder’s WVRAAM requirement, it lent hope that ties between the sides could finally be returning. It is our hope that long-term interests are put ahead of short-term expediency.