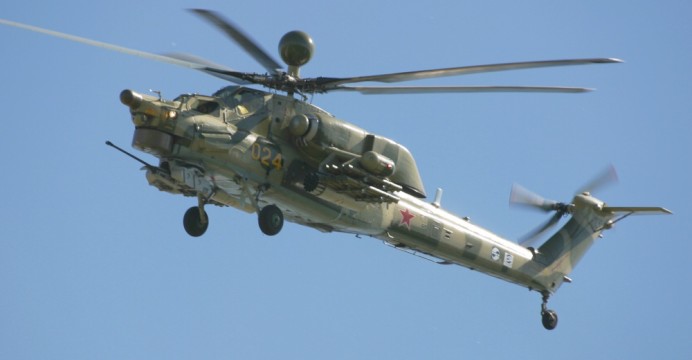 On 14 March Russia’s president, Vladimir Putin, announced that Russia would withdraw the “main” part of its forces in Syria. The following day, a number of Russian combat aircraft had begun to exit the country.

Russian military analysts and experts told the news outlet, Russia Beyond The Headlines (RBTH), that more than half of the deployed fighters and fighter-bombers will be recalled, but the integrated air defence system (IADS) and naval unit will remain. The Russian troop presence will only see a ‘slight’ reduction.

It seems Russia is not “withdrawing” from Syria, but rather, it is reconfiguring its presence. One indicator of that idea is the fact that on the day that a number of fighter/fighter-bomber aircraft left Syria, a number of Mi-28NE “Night Hunter” and Ka-52 “Alligator” dedicated attack helicopters entered the country.

These helicopters are also designed to be durable and survivable, especially since they have to operate at low-altitude. In the counterinsurgency (COIN) environment of Syria, the low-altitude realm is fraught with threats in the form of man portable air defence systems (MANPADS) and anti-air guns. In fact, it was only a few days ago that a Syrian Arab Air Force (SyAAF) MiG-21 was downed under these conditions.

In order to mitigate these threats, helicopters such as the Mi-28NE and Ka-52 are equipped with advanced self-protection suites which incorporate systems such as missile launch warning, flare dispensers, and directional infrared countermeasures (DIRCM). These countermeasure suites can thwart infrared guided surface-to-air missiles (SAM), such as MANPADS. The Mi-28NE and Ka-52 are also durable to heavy gunfire, thanks in great part to the armour used to protect the cockpit/cabin areas.

While these attack helicopters will be key in terms of protecting Russia’s numerous military installations in Syria, they may also end up supporting the Syrian ground forces in their attempts to hold the territory they have wrestled away from the armed opposition. The nighttime capabilities of these helicopters may also be used to continue ongoing operations against groups such as ISIS and Jahbat an-Nusra. Moving forward, it is possible that the Russians will use the Mi-28NE and Ka-52 for low-altitude CAS operations, whilst reserving available fighters (such as the Su-35 and Su-30SM) for airstrikes.

It is also important to understand that Russia will still maintain its infrastructure in Syria, which will enable it to re-deploy fresh assets – such as new fighter-bombers – in short order. In fact, Putin himself was not shy of stating that fact in his recent statements, “if necessary, literally within a few hours, Russia can build up its contingent in the region to a size proportionate to the situation developing there and use the entire arsenal of capabilities at our disposal.”