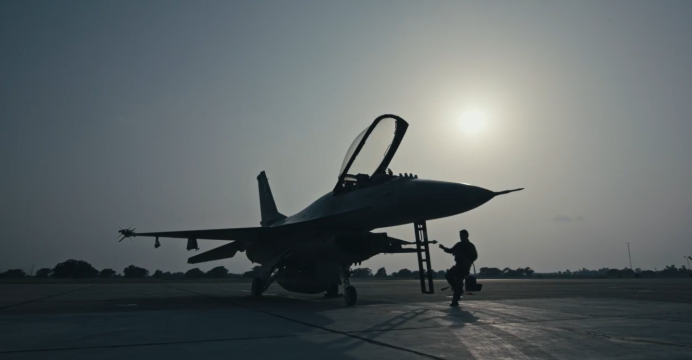 A recent episode of ‘Defence and Diplomacy’, a policy news and analysis show hosted by retired Pakistan Air Force (PAF) Group Captain Sultan Hali, offered a number of interesting insights into the PAF’s apparent modernization roadmap, particularly with regards to its fighter fleet. This analysis will touch upon a few key points raised in the episode (which also included retired Air Marshals Shahid Lateef and Yousuf Chaudhry), especially in regards to the PAF’s rationale for pursuing the F-16 as well as its reluctance to induct a comparable alternative, such as the Chengdu FC-20 (i.e. J-10).

For the foreseeable future, the PAF will center its fighter acquisition plans on the JF-17 and F-16. Before continuing into how the PAF would pursue each fighter, it is important to understand the driving forces behind the PAF’s decision. To put it frankly, the main issue is Pakistan’s troubled economy. In other words, the PAF has very limited financial flexibility to depend on in order to replace its heavily aged fighters, i.e. the Dassault Mirage III/5 and Chengdu F-7P. The next several years will be critical for the PAF as it intends to phase-out a significant number of its legacy fighters by 2020.

In terms of the F-16, the PAF is currently looking to procure eight new F-16C/D Block-52+ from the U.S. It is important to note that the PAF is hoping to acquire these fighters with considerable Foreign Military Financing (FMF) support. In other words, it expects the U.S. to subsidize nearly half of the total cost (which is $700 million U.S.). If acquired, this batch would raise the PAF’s total F-16 fleet to 84 aircraft: 26 F-16C/D Block-52+, 45 F-16A/B MLU [Mid-Life-Update], and 13 F-16A/B ADF (Air Defence Fighter).

Through a mix of new-built and used aircraft, the PAF is probably looking to expand the F-16 fleet to 110, which it had originally planned for in the late 1980s, before the U.S. placed sanctions on Pakistan over the latter’s nuclear weapons program. Additional new-built F-16s could be acquired on an incremental and gradual basis whereby the PAF orders numerous small batches over a period of several years. If future acquisitions were to cost in the realm of $350 million U.S. per-order (especially with FMF support), the PAF could succeed in building a relatively sizable Block-52+ fleet by 2020.

The PAF may also pursue used F-16s from the U.S. through the Excess Defence Articles (EDA) program, which would enable it to buy airframes for very cheaply. It could also speak to other air forces, just as it did with Jordan in 2013-2014. It could opt to push these F-16s through a service-life extension program (SLEP), which would add life to their aged airframes. It might also consider upgrading them with a radar and avionics package identical to that found on its existing Block-52+ and MLUs.

However, the cost of replenishing and upgrading these F-16s ($30-35 million U.S. per unit) would basically amount to the cost of a new-built JF-17. The PAF could ultimately acquire used airframes without upgrading them, which would enable it to quickly replace outgoing F-7s and Mirages. In fact, a non-upgraded F-16 would be a substantial upgrade over old F-7 units involved in basic air defence duties (i.e. without the use of beyond-visual-range air-to-air missiles or BVRAAM).

In terms of capability, the PAF’s F-16s are equipped for precision-strike as well as air-to-air warfare. The PAF has 500 AIM-120C5 BVRAAMs, Joint Direct Attack Munition (JDAM), and Paveway Guided Bomb Units (GBU) in its inventory. Unfortunately, despite having its F-16s equipped with the Joint Helmet Mounted Cueing System (JHMCS), a helmet-mounted display and sight system (HMD/S), it has not yet acquired the AIM-9X high off-boresight (HOBS) within-visual-range air-to-air missile (WVRAAM). At present, the F-16’s WVRAAM capabilities are centered on the AIM-9M-8/9, which is a fairly capable current-generation all-aspect missile. Moreover, the PAF’s F-16s lack stand-off munitions and anti-ship missiles.

Since the PAF intends to continue procuring additional F-16s, especially new-built fighters such as the Block-52+, it is imperative that it secure these munitions. The main inhibitor would be the U.S., which will avoid tipping the balance of air warfare capabilities between India and Pakistan in Pakistan’s favour. That said, this technology is making into Pakistan via the JF-17, which – by Block-III – will be equipped with a HOBS AAM (and it is already being integrated with various stand-off munitions). The release of the AIM-9X, AGM-154 JSOW and AGM-84L Harpoon Block-II ought to be on the PAF’s roadmap.

With these limitations and issues in mind, one may ask why the PAF is not looking at the Chengdu FC-20 (i.e. J-10), especially as an alternative to the F-16. The reasoning is quite simple. If the PAF were to procure the J-10, it would simply be acquiring another medium-weight fighter. In other words, its inclusion does not necessarily add to the PAF’s existing capabilities, at least in a significant enough way to warrant the induction of an entirely new platform. Yes, the J-10 would offer additional range, payload, and capability boosts (e.g. radar output) compared to the JF-17, but are these advantages significant enough to warrant the costs of introducing a completely new maintenance channel, especially for what will inevitably be a relatively small number of aircraft (i.e. two squadrons)? It will not.

If this is the case, one might ask why the PAF is focusing on the F-16 at all, why not double-down on the JF-17? The question assumes that the PAF is not doubling down on the JF-17. At this point, the PAF is not even looking to buy a significant number of new-built F-16s. It only has eight aircraft on the table, and that too with substantial financial support from the U.S. If one were to consider what is in store for the JF-17 Block-III, then it would be evident that much of the PAF’s fighter budget is in fact going towards the development and induction of the JF-17.

Beyond the JF-17, the PAF has scarcely little financial flexibility. If it were not for FMF, it is unlikely the PAF would even procure the new F-16s. However, the addition of these new F-16s will add to its existing fleet, which will enable the PAF to exploit its existing maintenance infrastructure as well as build its fleet, until such time that a true next-generation fighter is available. On Wednesday, we will take a look at that as well as review the JF-17’s role as the future backbone fighter.