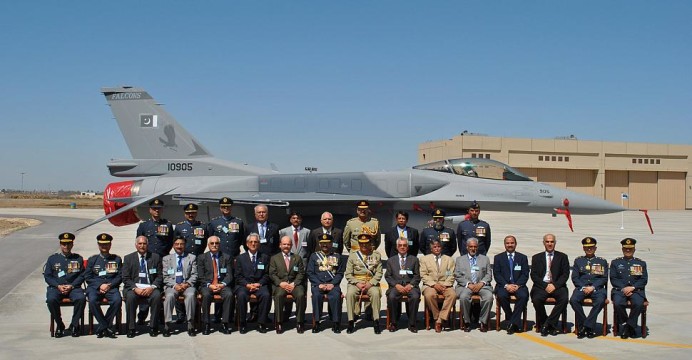 Pakistan in Talks for New F-16s

The Pakistan Air Force (PAF) Chief of Air Staff (CAS) Sohail Aman confirmed to numerous Pakistani media outlets that the PAF was in negotiations with the U.S for â€śthe latestâ€ť F-16s (Dawn News). No specific information was given, e.g. the type or numbers involved, but the CAS stressed that the â€śdeal may take some time.â€ť Currently, the PAF has 18 F-16C/D Block-52+, 45 F-16A/B Block-15 MLU [Mid-Life Update] and 13 F-16A/B Block-15 ADF [Air Defence Fighter].

In a way, the F-16 is the embodiment of U.S-Pakistani relations. It is important to understand that American arms sales to Pakistan are not straightforward commercial transactions, but a means for both Islamabad and Washington to strengthen their respective interests. Pakistan requires advanced arms such as the F-16 as a means to strengthen its conventional warfighting capabilities against India, and through a mix of military aid and access to equipment, the U.S has met (to varying degrees of fulfillment) those requirements. However, the U.S uses that equipment as leverage to entice the Pakistani military to support American interests in the region.

After a successful operational run in the 1980s, the PAF ordered 71 F-16A/B Block-15OCU [Operational Capability Upgrade] from the U.S to augment its existing fleet of 39 aircraft. However, the U.S placed an arms embargo on Pakistan in response to Islamabadâ€™s persistence in pursuing its nuclear weapons program, and as a result, the PAF was prevented from acquiring those additional F-16s.

In 2005 the U.S under President George W. Bush lifted the F-16-embargo, and in 2006-2007 the PAF ordered 18 new-built F-16C/D Block-52+ and MLU kits (for its existing and 14 additional surplus fighters). The multibillion-dollar deal also involved a large cache of air-to-air and air-to-ground munitions. The order also left open an option for 18 additional Block-52+, but severe economic woes prevented the PAF from pursuing it. However, the PAF was able to acquire 13 F-16 Block-15 ADFs from Jordan in 2014, though it is unclear if those ADFs will through the MLU, which would equip them with a radar and onboard electronics suite similar with what is in use on the F-16C/D Block-52+.

In October 2015 the U.S government reportedly cleared the sale of eight new-built F-16s to Pakistan. It is unclear if ACM Amanâ€™s statements were in reference to this sale, but it would seem unlikely since the ACM was referring to negotiations, not Congressional approval (which would occur once the Department of Defense is in agreement of a sale). In other words, the ACMâ€™s may be referring to new-built F-16s in addition to the eight reportedly approved by the U.S government, but this is just speculation. The end number of new F-16s the PAF could be looking for may range from 18 to 36, the former being in reference to the Peace Drive deal signed in 2006-2007, and the latter if the fleet number envisioned in 1989 (110) is being pursued.

As for type, this is unclear as well. The ACM said that â€śthe latestâ€ť F-16s were being discussed, but without a specific reference (such as whether it would include an active electronically scanned array or AESA radar), it is difficult to come up with a specific idea. However, given the reality of what is poised to enter South Asia in the coming years in terms of advanced fighter hardware, it is well within reason to believe that the PAF could request the F-16V, which is equipped with the AN/APG-83 AESA radar. The advantage of the F-16V program is that it could be applied onto most F-16 types; in other words, new F-16Vs for the PAF could be Block-52+ airframes with new radar and EW/ECM [electronics warfare and electronics countermeasures] suites. Such an acquisition would allow the PAF to make use of the infrastructure and maintenance overhead of its existing Block-52+. Whether the U.S would agree to such a sale is another question. It also unclear (and unlikely) if a purchase of additional munitions, such as the AIM-9X or Joint Stand-off Weapon (JSOW), is also on the cards.

Ultimately, the primary motivator for additional F-16s on the part of the PAF would be the reality that it is a mature platform in which the PAF is fully knowledgeable of and capable of readily accepting. It is also a reality that new F-16s would be amongst the most affordable Western platforms in terms of acquisition and operational costs. Unfortunately for Pakistan, it is a platform laden with a considerable amount of risk, not least in terms of the U.S using the sale as leverage to drive its interests in the region.