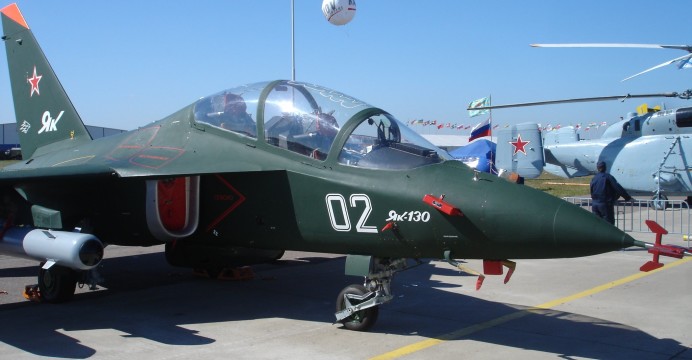 Pakistan and Yak-130? Not likely

There has been quite a bit of discussion on a recent news piece claiming that the Pakistan Air Force (PAF) is interested in the Yakovlev Yak-130 lead-in-fighter-trainer (LIFT) aircraft. It is no secret that LIFT aircraft such as the Yak-130, KAI/Lockheed Martin T-50, Alenia Aermacchi M-346 and Hongdu L-15 are catching on with a number of air forces to bridge pilots from basic and intermediate training to converting on their respective air force’s fighter platforms.

In a May 2015 interview with AirForces Monthly, Air Chief Marshal (ACM) Sohail Aman discussed that the PAF did in fact look at various LIFT options, namely the South Korean T-50 (developed by Korea Aerospace Industries and Lockheed Martin) and Chinese Hongdu L-15. Although understanding the inherent value of such systems in preparing new pilots for advanced multi-role platforms, ACM Aman said, “but the difficulty is many like the KAI T-50 and Hongdu L-15, with their afterburners, are like fighters, and will cost around the same as an F-16. We cannot afford that now.”[1]

These LIFT aircraft are expensive. In fact, they are basically lightweight fighters not unlike the JF-17 currently in use with the PAF! For reference, the KAI/LM T-50 costs around $25 million per unit. So it begs the question, why would the likes of the Royal Air Force or United States Air Force go for such systems? Well, one just needs to look at the reality that the RAF and USAF operate expensive platforms, acquiring systems such as the T-50 would be genuinely cost effective and safe. There is an actual cost difference between operating a Eurofighter Typhoon and KAI T-50. With this in mind, it would be disingenuous to extrapolate the realities of the RAF upon the PAF.

Yes, the JF-17 Block-3 onwards will in all likelihood end up being fairly expensive platform in of itself (Active Electronically Scanned Array radars do not come cheap!), but the actual JF-17 platform (stripped of its various upgrades and changes) is not expensive. In fact, while a dual-seater is slotted to resolve the PAF’s LIFT needs, the PAF could go a few steps further.

The PAF can use the dual-seat JF-17 as a basis for developing an actual LIFT system. This would not be too different from what the U.S did in developing the T-38 Talon, which was based on the Northrop F-5 Tiger II. In the end, a LIFT JF-17 would have complete commonality with the PAF’s JF-17 fighter fleet, thereby eliminating the difficulty of inducting and maintaining an entirely new aircraft type. Moreover, given the fact that the typical PAF fighter trainee would join the fleet on the JF-17, conducting his or her fighter conversion training on a near-identical platform would greatly ease the operational conversion process.

All that said, there may be one variable that could – possibly – steer the PAF to something like the Yak-130, and that is if the Yak-130’s acquisition and operational costs are meaningfully lower than that of a dual-seater JF-17. If the PAF is in fact looking at the Yak-130, then there may be a chance, but like the reports about the PAF looking at the Czech L-159, it is unlikely its interest here will result in anything.