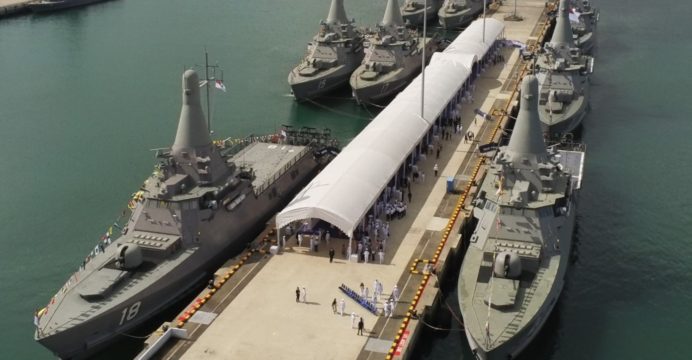 On 31 January 2020, the Government of Singapore announced that the Republic of Singapore Navy (RSN) received its final three (for a total of eight) Independence-class Littoral Mission Vessels (LMV).

Singapore’s Ministry of Defence awarded its domestic defence vendor ST Engineering with the contract to design and construct the eight LMVs for the RSN in 2013.

With a length of 80 m, beam of 12 m, and displacement of 1,250 tons, the Independence-class LMV joins a growing list of sub-2,000-ton surface combatants with multi-mission capabilities.

The LMV relies on combined diesel and diesel (CODAD) propulsion layout using four MTU engines, giving the LMV a top speed of 27 knots, and a range of 3,500 nautical miles (or endurance of up to 14 days).

The LMV can operate with a crew as small as 23 personnel, though it can support up to 30 individuals. In addition, the LMV also has an aft deck capable of supporting a medium-weight helicopter. Its other key feature is that its electronics (e.g., radar) are enclosed behind a superstructure, thus protecting them from the environment and easing maintenance.

Though the LMV is not equipped with anti-ship warfare (AShW) or anti-submarine warfare (ASW) weapons from the on-set, the LMV was designed to take on “mission modules to meet the specific mission needs.” While configurable, the modules likely center on search-and-rescue (SAR), humanitarian aid and disaster relief (HADR), and possibly intelligence, surveillance and reconnaissance (ISR).

The LMV was primarily designed to replace the RSN’s legacy 500-ton Fearless-class patrol vessels. Thus, it was designed to improve upon the core capability set of those Fearless, not emulate the RSN’s marquee surface combatant, the 3,200-ton Formidable-class multi-mission frigate.

However, should a country choose to do so, it could design a sub-1,500-ton corvette with complete AShW, ASW, and AAW capabilities. Yes, it would require designing the ship to carry weapons and subsystems to fit in a limited space, and would also necessitate compact enough inputs.

The main drawback of a multi-mission design is a higher procurement cost. Thus, ST Engineering’s design approach, which is centered on modularity, could hint at an alternative method. Basically, one could start with a low-cost design with baseline capabilities. So, while retaining the space for a multi-mission set-up, one could start with only the weapons and electronics they need for the immediate role.

But after constructing the ship, one could add other capabilities later, especially if the situation requires it on an urgent basis. So, instead of frontloading the cost of AShW, ASW and AAW together (and sustain the long-term support costs from day one), one could start with AShW, but add ASW and/or AAW later.

The benefit of this approach is that if these ships never experience a wartime situation, the end-user does not need to absorb the cost of wartime capabilities. However, should it need those other capabilities, the end-user can add them, either as an upgrade or through ‘mission modules.’ The key is designing the ship to take on those additions as cost-effectively and quickly as possible.