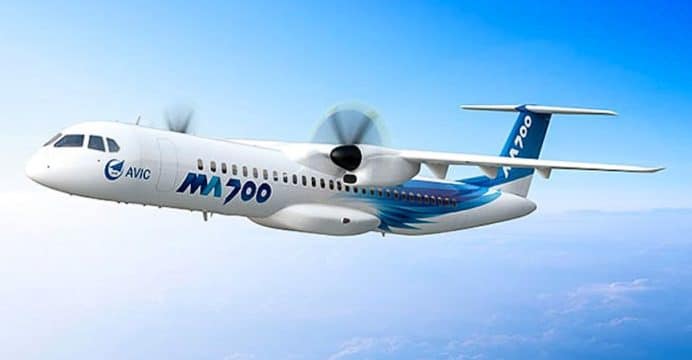 On 27 December 2019, Pakistan Aeronautical Complex (PAC) announced that it signed an agreement with the Aviation Industry Corporation of China (AVIC) for the “co-production of Chinese commercial aircraft.”

In 2017, PAC had expressed interest in manufacturing a 10-30 passenger commercial airliner or commuter aircraft to support the growing demand for domestic air travel. It is not known if PAC is still pursuing that goal, but the recent agreement AVIC could point towards a more manageable objective.

In 2018, PAC revealed that it was working on an expanded aerospace cluster (as part of the Kamra Aviation City initiative), and that it was hoping to attract Tier 1-4 production work from Boeing, Airbus, and other aircraft manufacturers. PAC was hopeful that the initiative could result in the domestic assembly of single-aisle commuter aircraft and jet airliners (Aviation Week – subscription required).

It is possible that this recent agreement with AVIC is tied to the objective of expanding Pakistan’s share in the supply chains of various airliner/commuter aircraft manufacturers. In this case, PAC would enter the supply chain of AVIC’s aircraft, such as the Xian MA60/600/700 and/or ARJ-21.

It is worth noting that Hybrid Aviation, a privately-owned Pakistani aviation company is a launch customer of the Xian MA700 (Reuters).

In other words, there could be a regional airliner requirement in place (by PIA as well as Pakistan’s private sector airlines) that could link into production work for PAC. The latter could materialize through industrial offsets, or possibly a joint-venture or partnership for an airliner-focused spinoff of PAC.