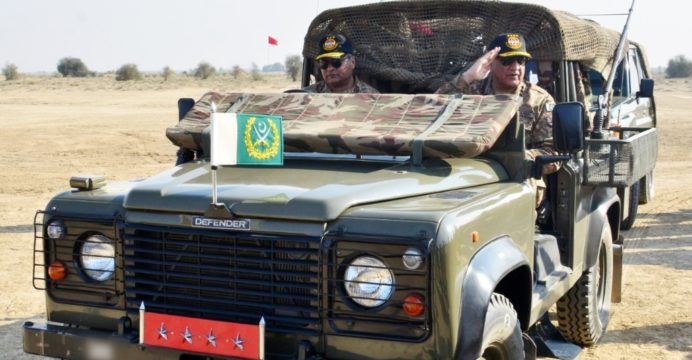 The drill centered on “trans-frontier offensive operations” and involved a Pakistan Army Strike Corps as well as fighter aircraft from the Pakistan Air Force (PAF) and a Royal Saudi Land Forces (RSLF) contingent.

In its press release, the ISPR stated that exercises of this kind “enhance confidence for exploiting their optimal combat potential.” The ISPR added that the Army’s Strike Corps serve a “decisive role” in wartime.

Based on the video footage released by the ISPR, it appears that the PAF employed its Mirage III/5 fighter aircraft. In addition, the Pakistan Army Aviation Corps (PAA) also took part with its AH-1F/S Cobra attack helicopters, i.e., as close air support (CAS) assets for the Strike Corps’ tanks.

It is worth noting that the PAF is conducting a parallel exercise (designated Hawk-Eye) with a similar goal as the Army, i.e., simulate offensive operations through the use of key assets. The PAF recently announced that it undertook a number of nighttime training drills.

Pakistan’s drills came weeks after India initiated its own large-scale exercise – dubbed ‘Sindhu Sudarshan’ – in the Thar Desert in Rajasthan. India’s drill involved over 40,000 soldiers alongside tanks, artillery and helicopters. Though the scale of Pakistan’s exercises are unclear, an emphasis on integrating air and land assets (and across both the Army and Air Force) appears to be a common factor.