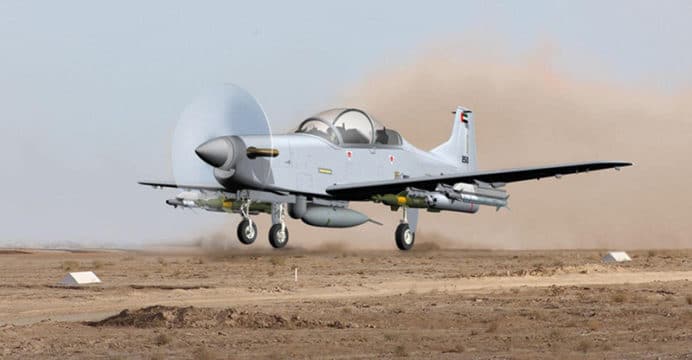 The Calidus B-250 is a turboprop-powered light attack aircraft intended for counterinsurgency (COIN) and counterterrorism (CT) operations. It joins a growing roster of similarly designed aircraft – arguably led by the Embraer EMB-314/Sierra Nevada Corporation A-29 Super Tucano – in filling a specific air power niche, i.e., deliver precision-guided air strikes at a fraction of the cost of deploying fast jets, such as the F-16.

The UAE’s order carries several implications, among them the UAE’s interest in investing in its own aircraft design and manufacturing sector, and its air force’s judgement that a turboprop aircraft offers value.

The B-250 had actually started out as a project of a Brazilian aerospace company, Novaer.[1] In 2015, Calidus – a United Arab Emirates (UAE)-based company – acquired Novaer. Calidus then commissioned Novaer to develop the B-250, but with a number of specific design characteristics, including:

To achieve these goals, Novaer’s chief designer, Joseph Kovács opted to build the B-250’s airframe entirely out of composite materials (e.g., carbon-fibre).[3] Calidus claims that the B-250 is not only lighter than the Super Tucano, but it is also larger and offers better performance.

Like its market rivals, the Calidus B-250 sports a low-wing, tandem-seat design. It is also powered by the commonly adopted Pratt & Whitney PT6A-68 (the same core engine used onboard the Super Tucano, the Turkish Aerospace Hürkuş, AT-6 Wolverine, and other similar platforms).

However, Calidus/Novaer opted to use a four-blade Hartzell propeller instead of a five-blade configuration – which is common in other turboprop attack aircraft – to increase efficiency.[4]

The Calidus B-250 is equipped with seven hardpoints – six of which are under the wings, and one under the fuselage (i.e., centerline). The end-user can arm the B-250 with Mk80-series general purpose bombs (GPB), precision-guided bombs (PGB), laser-guided rockets, and other munitions.

As the B-250’s launch user, the UAE is likely to use Barij Dynamics (formerly known as Tawazun Dynamics, now under the parent company EDGE Group) al-Tariq PGB kits.

The al-Tariq can be configured onto Mk81 and Mk82 GPBs and, optionally, use semi-active laser-homing (SALH) or imaging infrared (IIR) seekers. The latter offers a fire-and-forget capability. It can also use gliding range-extension kits, which can offer a reach of up to 100 km.[6]

To guide its munitions, the end-user can fit the B-250 with an electro-optical and infrared (EO/IR) turret; currently, the B-250 uses the L3 Wescam MX-15D EO/IR system.[7] However, Calidus stressed that it could tailor the B-250’s munitions set to the preferences of the end-user, and use non-UAE bombs and rockets.

More Than Another Turboprop Attack Aircraft?

On the one hand, the value proposition of the B-250 is not too different from other turboprop-powered COIN/CT aircraft, such as the Super Tucano or Hürkuş. The B-250 would enable its end-user to deploy a range of PGBs in ‘low-intensity’ environments with limited anti-air threats at a much lower cost than fast jets such as the F-16 (e.g., an operating cost of $1,200 per hour).

However, Calidus stresses that the B-250 brings its own benefits to the table. For example, Calidus stated that unlike its contemporaries, the B-250 is not a repurposed trainer. Rather, the B-250 was designed from the ground-up as an attack aircraft, and it points to the higher top speed as an example.[8]

Likewise, Calidus does not believe that the B-250’s utility is restricted to uncontested air space; rather, it can be used while the end-user is securing air superiority. So, for example, the B-250 offers a pressurized cabin, enabling g-suit-equipped aircrew to operate over a combat environment over a long time-period.[9]

Finally, Calidus is also open to gradually integrating innovative, low-cost weapons to the B-250 if and when these weapons become available. If anything, it speaks to an openness to customization. It will be worth seeing if Calidus absorbs the integration costs upfront so as to create proof-of-concepts, especially in key target markets (which will likely include Sub-Saharan Africa and the Middle East).

Thus far, the only slated user of the B-250 is the UAE. However, it is worth noting that the UAE was already using the IOMAX Archangel. However, it opted for the B-250, which could be a vote of confidence in the platform (domestic industry support measures notwithstanding), especially since the UAE has experience operating turboprop aircraft in COIN/CT missions.

However, one issue that might restrict the B-250’s exportability could be its heavy use of US-origin systems (e.g., Rockwell Collins’ avionics suite) and third-party weapon systems. On the other hand, Calidus might be able to resolve these issues with time, especially as the UAE’s Edge Group appears intent on expanding its R&D investment across a range of areas. Avionics and new munitions are certainly doable for the UAE.