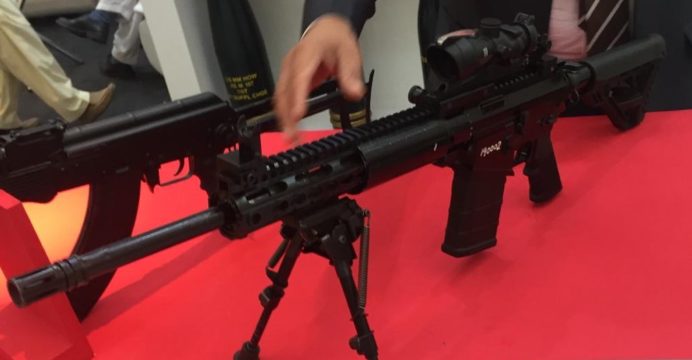 POF states that the PK18 is “ergonomic, modular, accurate and highly reliable in most difficult operational conditions.” The rifle is also equipped with a MIL-STD-1913 Picatinny rail for accessories, such as optical sights and vertical grips. The PK18’s buttstock is also adjustable.

Fewer details were made available for the PK21 and POF10.

It appears that the PK21 is a Kalashnikov variant, and though POF labels it as an AK-103 in parenthesis, no licensed production agreement is in place between the Kalashnikov Concern and POF.

Currently, no details are available for the POF-10 pistol.

The PK18 appears to be based on the AR-platform and, given the availability of marketing materials, the closest to availability. It is unclear if the Pakistan Army will opt for the PK18 and/or PK21 for its standard-issue firearms requirements, POF’s new firearm family could be geared towards export in the near-term.

It is also unclear if POF will manufacture the PK18 with locally sourced materials and production processes.

For full-scale production, POF will need access to polymers and other materials as well as a highly precise machining equipment. In fact, in November 2017 POF requested $250 million US (spread over five years) to modernize its facilities, especially as 58% of its machinery is now over 30 years of age.