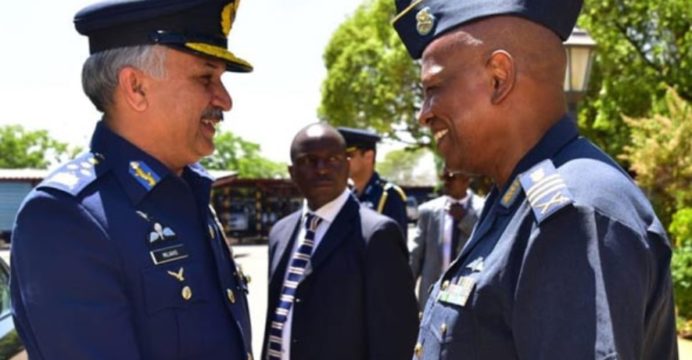 During the visit, ACM Khan met with the Chief of the South African Air Force (SAAF), Lieutenant General Fabian Msimang. The two chiefs “discussed professional matters” (Radio Pakistan), with the PAF air chief extending an offer to cooperate on training and other areas.

Officially, South Africa and Pakistan concluded a memorandum-of-understanding (MoU) in 2017 with the aim of enhancing bilateral defence cooperation on multiple fronts.

Titled “Defence and Defence Industrial Cooperation,” the MoU set the groundwork for the “acquisition of defence equipment as well as cooperation in Research and Development (R&D), Transfer of Technology, Co-production/Joint Ventures in public as well as private sector.”

It is unclear to what extent either side has drawn from this MoU.

The Pakistan Army reportedly bought ammunition of an unknown type from Rheinmetall Denel Munition (RDM). Interestingly, the 2017-2018 Ministry of Defence Production (MoDP) report lists a $2.6 million US acquisition for 891 HE ERFB-BBRA shells. The abbreviation appears to stand for “Extended Range Full Bore – Base Bleed – Rocket Assisted,” which means it is a velocity enhanced artillery projectile (VLAP).

Besides specific weapon systems, Pakistan and South Africa could also collaborate on critical inputs, such as rocket motor technology and air-breathing engines for missiles and drones; electronics such as seekers; land applications such as artillery guns, armoured vehicles, and many other solutions.

With the PAF aiming to gain turnkey fighter manufacturing capability via its fifth-generation fighter aircraft (FGFA) program, South Africa’s expertise could be useful across various areas. Interestingly, South Africa is interested in potentially developing a loyal wingman drone, a concept that numerous countries are now looking to develop as part of their respective next-generation air warfare programs.