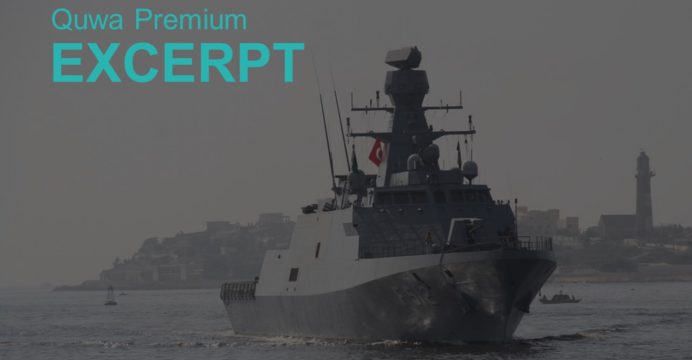 According to a press release from Kalashnikov Concern, the AK-308 is based on the AK-103 (i.e. a 7.62×39 mm assault rifle), but with design elements from the AK-12 and AK-15, which are configured in 5.45×39 mm and 7.62×39 mm, respectively.[2] The AK-12/AK-15 design features shown with the AK-308 include the former’s retractable stock, receiver and capacity to readily incorporate accessories, such as sights and grips. Kalashnikov has begun delivering the AK-12 and AK-15 to the Russian Ministry of Defence in 2018…

During the 2018 International Military-Technical Forum “Army 2018”, the Russian company RTI Group signed a “memorandum of cooperation” with a Pakistani firm, TechWin Enterprise, for “organizing the delivery of the civilian radar Surok.”[4] According to RTI Group’s press release (via the Russian News Agency TASS), the Surok radar “is set to control and protect the Karachi NPP’s (nuclear power plant) facilities.”[5] …

According to Defence Turkey, the first ship will be constructed within 54 months, with the remaining due in 60, 66 and 72 months. Basically, the Pakistan Navy (PN) corvette program is due for completion by 2024, at least in terms of getting each of the ships floating and put through sea trials. The second and fourth ships will be constructed in Pakistan by Karachi Shipyards & Engineering Works (KSEW).[7]

However, there will be notable differences between the Turkish and Pakistani corvettes. Firstly, it seems that the PN’s ASW corvettes will not be configured with the combined diesel and gas (CODAG) propulsion suite powering the Turkish Navy’s Ada-class corvettes.[8] Instead, Defence Turkey has hinted that the PN’s ships will rely on combined diesel and diesel (CODAD), which will afford additional endurance (15 days to 10 days) and additional fuel capacity, but with a lower top speed (26 knots vs. 31 knots).[9]

Likewise, Pakistan will be providing some of the ASW corvettes’ subsystems and weapons via Government Furnished Equipment (GFE) approach.[10] Some had speculated that the ASW corvettes’ equipment could, at least in part, come from the PN’s existing ships – e.g. Harpoon Block-II anti-ship missiles (AShM) and/or Phalanx close-in-weapon-systems (CIWS). However, factors such as the remaining life on those weapons as well as the potential complication of integrating them to non-US (i.e. non-approved) sensors and, not least, the prospect of US interference could dampen that scenario.

Thus, it is evident that the PN is not opting for the MILGEM Ada in the Turkish Navy’s configuration. That leaves two alternative options: First, an original configuration with a combination of different subsystems and weapons from various (but interoperable) sources. Second, an off-the-shelf configuration handled by one vendor, but with systems procured from either one or multiple sources.

In terms of an original configuration, the PN could take an approach akin to what it had for the ATR-72 maritime patrol aircraft (MPA) program. The PN’s ATR-72 MPA incorporates subsystems from Leonardo, FLIR Systems, Elettronica and AeroMission. In turn, the PN contracted the German company Rheinland Air Service as the prime contractor to integrate, test and validate the MPA system.

The alternative is to work with an experienced contractor that has already developed a sensor, subsystem and weapons package for ASW corvettes. In this case, the package would have to be demonstrated to the PN through a working model, ideally a ship that is already in service. Interestingly, be it the first or second scenario, the same subsystem and weapon vendors could be involved in the process…