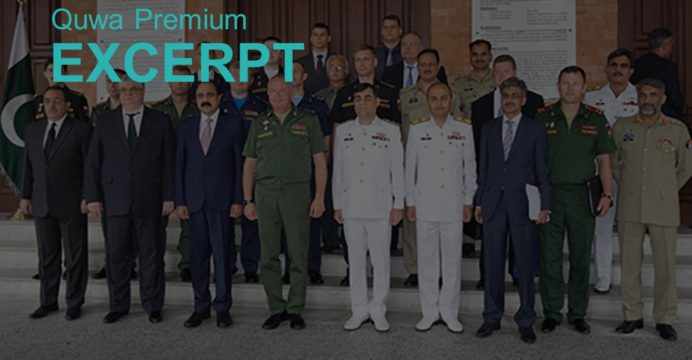 On 06 and 07 of August, the respective defence ministries of Pakistan and Russia had completed their first bilateral meeting under the Russian-Pakistan Military Advisory Committee on Defence and Security.[1] Also termed the “Russia-Pakistan Joint Military Consultative Committee (JMCC),” the meeting is regarded as the “highest forum of defence collaboration” between Russia and Pakistan.[2]

The JMCC was held in Pakistan and involved one of Russia’s Deputy Ministers of Defence – Colonel-General Alexander Fomin – alongside Pakistani Defence Secretary Lt. Gen. (retired) Zamirul Hassan Shah. The main outcome of the meeting was the finalization and signing of the “Contract on Admission of Service Members of Pakistan in Russian Federation Training Institutes.”[3] In addition, the JMCC had conducted “in-depth discussions on avenues of future cooperation.”[4]

It appears that the JMCC is an evolution of sorts in Pakistan’s bilateral defence ties with Russia, which had kicked-off in 2014 when Moscow lifted its arms embargo on Pakistan and, in turn, inked an agreement for military cooperation. In addition to Russia, Pakistan holds high-level meetings of this nature with its other bilateral defence partners, notably Turkey (Pakistan-Turkey High Level Military Dialogue Group) and Italy (Pakistan-Italy Joint Committee on Defence Systems).

Seeing the current depth of Pakistan’s defence ties with Turkey and Italy, there is a sense that the JMCC with Russia could potentially spur comparable gains, most notably in terms of big-ticket procurement. But as it stands today, there appears to be limited, if any, substantive momentum on that front by either the Russian or Pakistani side. However, some quarters of Russia’s intelligentsia have urged that Moscow take steps to change the situation by actively promoting marquee systems, such as the Su-35, to Pakistan.

Thus far, Pakistan has only procured four Russian Helicopters Mi-35M assault helicopters. Otherwise, the balance of the relationship has largely been devoted to exercises, such as “Friendship” – i.e. a drill focused on counterinsurgency (COIN) and counterterrorism operations (CT). Delivering on COIN and CT interests, Russia’s primary defence export-import agency – Rosoboronexport – and its parent, Rostec, used the 2016 International Defence Exhibition and Seminar (IDEAS) in Karachi, Pakistan to promote armoured vehicles, small-arms and other systems of value in asymmetrical operations.[5]

However, the prospect of Pakistan procuring marquee big-ticket items – such as fighter aircraft, tanks and air defence systems – from Russia is currently limited, but overall ties (e.g. training) are expanding…