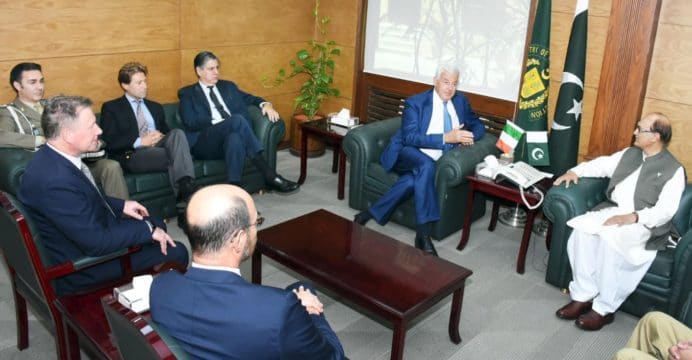 On 09 July 2018, Pakistan’s state-owned news agency the Associated Press of Pakistan (APP) reported that Pakistan and Italy had agreed to explore opportunities for joint defence production.

“Pakistan and Italy stressed upon the need to explore the areas in the field of joint defence production and regular exchange of high level visits between both the countries,” reports APP.

Interestingly, the call had also come following Pakistan’s decision to ink a big-ticket contract for 30 Turkish Aerospace (TA) T129 ATAK attack helicopters. AgustaWestland (now under Leonardo) had sold the A129 Mangusta with turnkey transfer-of-technology (ToT) and rights to market and export the platform.

A delegation led by Leonardo’s CEO could signal the company’s intention (with the support of the Italian government) to expand its operations in Pakistan, especially in light of the latter’s forthcoming programs. In fact, in December 2017 Leonardo reportedly said that it was also opening a new office in Pakistan.

One program of earlier interest to Leonardo is the PAF’s JF-17. Granted, the JF-17 Block-III is slated to use the Nanjing Research Institute of Electronics Technology (NRIET) KLJ-7A, but a pitch to retrofit the PAF’s existing JF-17 Block-I and Block-IIs could be interesting. Leonardo recently unveiled a low-cost AESA radar for lightweight fighters with limited internal room. This joins an earlier product release of a similar – i.e. low-cost and readily exportable – concept, the BriteEye Defensive Aids Suite (which Leonardo, albeit in its marketing material, shows to be “optimized” for the JF-17, among other fighters).