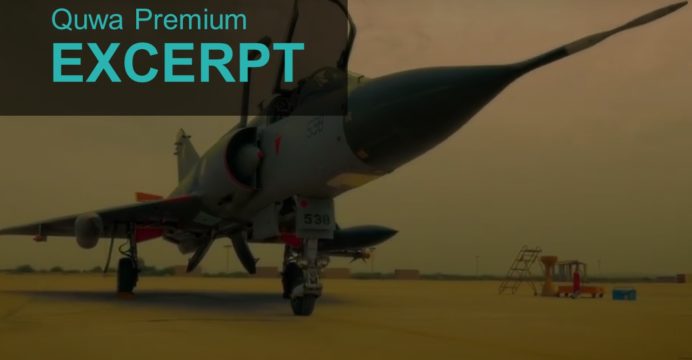 In April 2018, the AFP News Agency published an article detailing its visit to the Mirage Rebuild Factory (MRF) at Pakistan Aeronautical Complex (PAC).[1] The complete AFP article is available on Dawn News, but it provides an insight into the MRF’s activities in keeping the Pakistan Air Force’s (PAF) Dassault Mirage III and 5 fighters serviceable, especially with much of the fleet averaging 50 years in terms of airframe age.[2]

Interestingly, AFP was able to extract the reason why the PAF persists with operating the Mirage III/5, i.e. its continuing value as an effective strike aircraft, which the retired PAF Air Commodore Tariq Yazdani described (to AFP) as a “very agile aircraft capable of penetrating deep into the enemy’s territory without being detected by radar, which makes its sole mission — to drop bombs on the enemy’s position — quite easy.”[3]

Since its introduction to the PAF fleet in the late 1960s, the Mirage III/5 has transitioned from being the PAF’s mainstay high-tech fighter in the 1970s to a complementary asset to the newer F-16 in the 1980s. Today, the Mirage III/5 may not command as much attention as the F-16 and JF-17 as an air-to-air asset, but it is significantly more than just a valuable strike fighter – it is the PAF’s prime strike asset.

This prominence stems from two factors.

First is the straightforward reality that the PAF has not yet been able to secure a suitable successor. The cause primarily stems from a lack of funding (i.e. cash on-hand or financing mechanisms such as a supplier line-of-credit), but a limited pool of willing suppliers with aircraft that can substantively improve upon the Mirage III/5 to warrant the costly shift to a new platform.

Second, the Mirage III/5 is the PAF’s sole delivery platform for key stand-off weapons (SOW), namely the H-2 and H-4 glide-bombs (which are derived from the Denel Dynamics Raptor I and Raptor II – ranges of 60 km and 120 km, respectively) and Ra’ad I and Ra’ad II air-launched cruise missiles (ALCM), which have ranges of 350 km and 550 km, respectively. The Mirage 5PA3 can also carry the MBDA AM39 Exocet anti-ship missile (AShM). Prior to the C-802-equipped JF-17, the Mirage 5PA3 was the PAF’s only AShW asset – it still operates from the Masroor Air Base through the No. 32 Tactical Wing.

The complete article is available to Quwa Premium subscribers here.