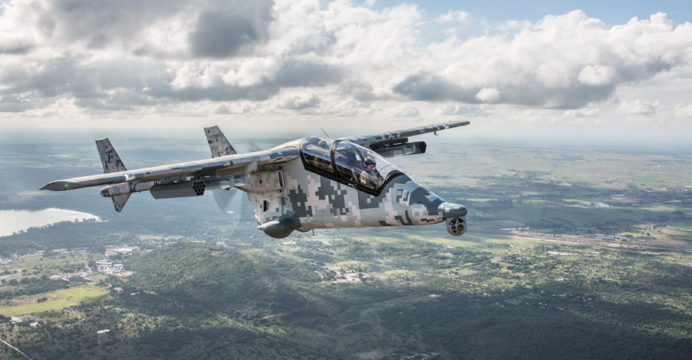 The private South African conglomerate Paramount Group has announced that its production factory for the AHRLAC (Advanced High Performance and Reconnaissance Light Aircraft) system is ‘fully operational’ as it embarks on serial-production for several undisclosed launch customers.

The AHRLAC production line is located at the Wonderboom International Airport Complex. Construction of the 15,000 m2 facility began in 2016. It is to have the capacity to roll-out 24 aircraft per year.

“It [the AHRLAC] brings us one step closer to addressing a key industry need – the capability to conduct numerous missions, in a variety of environments that previously required multiple aircraft. It offers a cost-effective solution to maintaining aeronautical relevance and effectiveness in an increasingly demanding, and ever-changing world.”

Paramount Group is excited for the AHRLAC for several reasons. First, the company presents the AHRLAC as the “first” combat aircraft to be designed in Africa. Second, that the AHRLAC – with its projected flight cost of $1,000 per hour – would aptly fulfill the needs of countries in need of low-cost airpower.

The AHRLAC is being positioned as a multi-mission solution suitable for surveillance, border patrol, anti-smuggling and disaster relief operations. It can also support counterinsurgency operations.

The AHRLAC is powered by a single Pratt & Whitney Canada PT6 turboprop engine. Paramount Group says that the AHRLAC can take-off at 550 m with a full payload, reportedly 800 kg. The AHRLAC has a maximum cruise speed of 500 km/h, service ceiling of 31,000 ft and maximum range of 2,000 km.