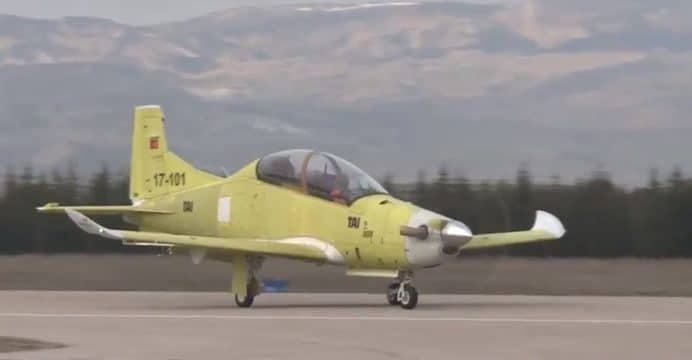 TAI Hürkuş B trainer prototype deliveries to start in June 2018

Turkey’s Undersecretariat for Defence Industries (SSM) announced that deliveries of Hürkuş B prototypes, developed and manufactured by Turkish Aerospace Industries (TAI), will begin in June 2018.

The Hürkuş B is slated to replace the Turkish Air Force’s T-37 Tweet basic jet trainers. Like other turboprop trainers, the Hürkuş B is being positioned as a more cost-effective alternative to jet trainers, namely due to the potentially lower operating costs of flying a turboprop compared to a jet.

The TAI Hürkuş is powered by a Pratt & Whitney Canada PT6A-68T turboprop engine, enabling for a top speed of 574 km/h and payload of 1,500 kg using five external hardpoints. The Hürkuş C has an armour-reinforced airframe (in support of its CAS/COIN mission profile).

Internally, the Hürkuş benefits from a glass cockpit with a hands-on-throttle-and-stick system, head-up display and multi-function displays along with an integrated avionics suite provided by Aselsan.

Turkey intends to supplant the PT6A with an indigenously designed and produced turboprop engine from TUSAŞ Engine Industries (TEI). The TEI gas turbine platform will also spur a turboshaft engine for TAI’s T-625 lightweight utility helicopter along with T129 and ATAK-2 attack helicopters

Besides domestic use, Turkey is also interested in exporting the Hürkuş B and C. Contact has already been made with numerous countries in Southeast Asia. Since 2015, TAI has also been pitching the Hürkuş B to the Pakistan Air Force (PAF), which operates a fleet of aging T-37s. Talks on the issue had purportedly took place in 2016.