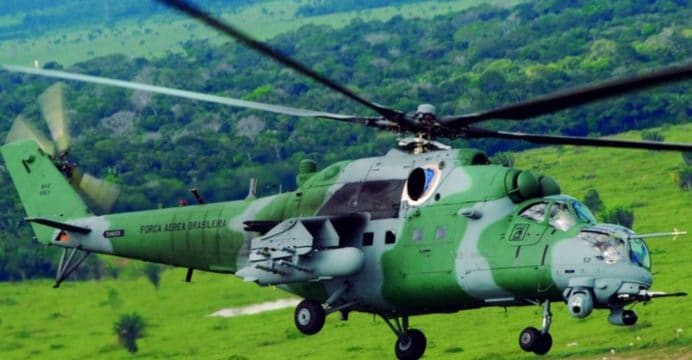 In an interview with the Financial Times, Pakistan’s defence minister Khurram Dastgir Khan outlined that Pakistan is engaging with China, Russia and Europe for the supply of new armaments amid turbulence in Pakistan’s relationship with the U.S.

“We have already bought some Russian helicopters in the past three years,” said Khan. “This is what we call a regional recalibration of Pakistan’s foreign and security policy.”

Financial Times had asked Khan about Pakistan’s purported interest in the Sukhoi Su-35 Flanker-E, asking if Pakistan has that fighter as an option. Khan stated, “not yet”, adding: “We have opened a dialogue with Russia, which traditionally we never had, because we were firmly in the western camp.”

Khan also claimed that the U.S. was not supplying spare parts for the Pakistan Air Force’s (PAF) F-16 fleet, stating that “ingenuity” and “other sources” were being used to keep the fleet flying.

Defence Minister Khurram Dastgir Khan’s messaging – i.e. of engaging Russia and China in lieu of the U.S. for the supply of new arms – echoes earlier statements from Pakistani officials, namely the Prime Minister, Shahid Khaqan Abbasi (2017), and then foreign affairs advisor Sartaj Aziz (2016). Despite the messaging, concrete progress in terms of procuring big-ticket Russian items is not apparent.

To be fair, the PAF’s current Chief of Air Staff (CAS), Air Chief Marshal Sohail Aman did identify the Russians as a prospective source for new fighter aircraft, telling Bol Narratives in April 2017: “We have both Chinese and Russian options.” However, such a prospect is beset with major challenges, among them the fact that India – while shifting the balance of its arms procurement to the U.S. and Europe – is still Russia’s leading arms importer. From a commercial standpoint, India still wields leverage.

Granted, there are areas where Russia’s support is indispensable, such as relatively affordable but highly capable long-range surface-to-air missile (SAM) systems as well as supporting the Indian Air Force’s (IAF) Su-30MKI fleet and the Akula-class nuclear attack submarine (SSN) in the Indian Navy. However, the need is evident on both ends, with Russian suppliers such as Kamov and Mikoyan strongly interested in securing new sales in India. Kamov currently has a 200-helicopter deal (i.e. Ka-226T) on table with India.

Although Russia might not be averse to selling arms to Pakistan, the latter’s fiscal strength would need to increase to offset India’s pressure. With Pakistan generally requiring lines-of-credit or loans to back big-ticket arms purchases, that ability to compensate the vendor is limited. This challenge is not confined to Russia, but France, the U.K. and Germany as well, leaving Pakistan with few viable suppliers.

Regarding Khan’s statements about the supply channel of the PAF’s F-16s, it is unclear if this is correct. As late as January 22, Pakistan registered an import of parts from Pratt & Whitney, i.e. the engine supplier of the PAF’s F-16s. Pakistan Aeronautical Complex (PAC) has an engine overhaul facility for the PW F100. Like Abbasi and Aziz before, it appears that Khan’s statements are politically driven more so than reflective of a PAF procurement plan. The latter is currently focused on the JF-17 Block-III and the forthcoming fifth-generation fighter program being pursued under Project Azm.