J-20 put through combat exercises with other PLAAF fighters
February 22, 2020 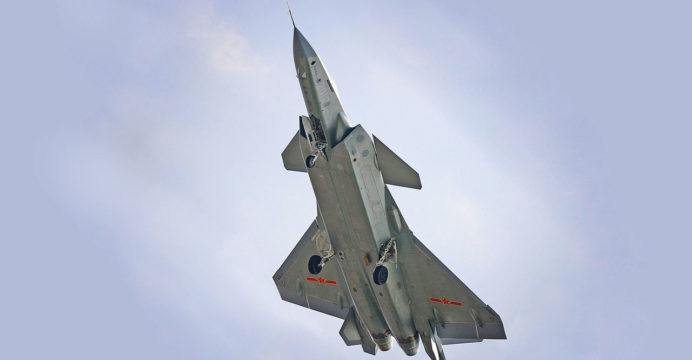 J-20 put through combat exercises with other PLAAF fighters

Reported by the state-owned China Daily, the J-20 undertook a series of tasks, including beyond-visual-range (BVR) air-to-air engagement with the PLAAF’s J-16 and J-10C, which are produced by the Shenyang Aircraft Corporation (SAC) and CAIG, respectively.

This marks the first official announcement of the J-20 being fielded following the fighter’s commissioning announcement in October 2017. China Central TV (CCTV) Channel 4 had also stated that the J-20 entered serial production, in which the PLAAF could procure at least 100 fighters (IHS Jane’s Defence Weekly).

Official specifications of the J-20 are not available, but it is a twin engine heavyweight aircraft designed to undertake long-range air-to-air and potentially air-to-surface operations. Powered by two 13+ ton-class turbofan engines, it could have a sizable payload capacity with long-range and long-endurance flight.

In parallel to the J-20, the Aviation Industry Corporation of China’s (AVIC) other leading fighter producer, SAC, is developing the FC-31 Gyrfalcon for the export market. This is a smaller and lighter-weight design than the J-20, optimized to be a multi-role platform built on two 9-10+ ton turbofan engines.

While meant for foreign users, AVIC had expressed interest in 2015 to secure domestic customers for the FC-31 – i.e. from the PLAAF and/or the People’s Liberation Army Navy (PLAN).

However, while beginning to induct the J-20, the mainstay of the PLAAF and PLAN’s procurements are tied to the J-10C and the J-11BS/J-15/J-16-series of localized Sukhoi Flankers.

The latter are benefitting from China’s research and development (R&D) work for the J-20 and FC-31, specifically in terms of radars, electronic warfare and electronic countermeasures, avionics and air-to-air as well as air-to-surface munitions. The serial production of the J-10C and J-15 et. al will remain in place for the foreseeable future, reinforcing their presence as the workhorses of the PLAAF and PLAN.

However, with China’s surrounding region now actively phasing into fifth-generation fighters – most notably the F-35 Lightning II – the J-20 and FC-31 will gradually gain prominence in line with those trends.