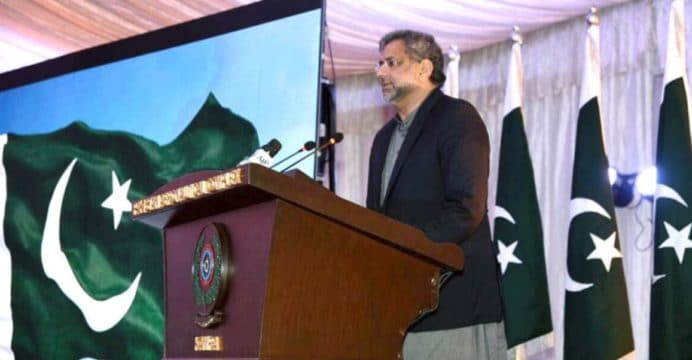 Air University, which was established in Islamabad, is raising an expansion campus in Kamra as part of the PAF’s Kamra Aviation City initiative, which is envisaged to facilitate the PAF’s objective of sourcing its next-generation combat aircraft domestically instead of off-the-shelf imports.

Lauding the event and the wider initiative, Prime Minister Abbasi stated, “I am confident that this Campus will play a central role beyond the academics to integrate technology, training, operations, maintenance and management of our national assets.”

The PAF Chief of Air Staff (CAS), Air Chief Marshal (ACM) Sohail Aman outlined the objectives of the Kamra Aviation City initiative, stating, “I believe that we have stepped into a path which will ensure indigenization of civil and military aircraft, weapons and avionics.”

Pakistan inaugurated the Kamra Aviation City complex in July 2017 with the aim of having it serve as a key conduit for aircraft design, development and manufacturing. Besides markedly reducing Pakistan’s use of overseas original equipment manufacturers (OEM) for aircraft, the Pakistani government hopes that the initiative would also contribute to Pakistan’s human capital development, increase its high-value exports and spur wider industry activity, especially in Pakistan’s private sector.

In July 2017, the PAF CAS announced “Project Azm”, a program aimed at securing a domestically produced medium-altitude long-endurance (MALE) unmanned aerial vehicle (UAV) and a fifth-generation fighter (FGF) for the PAF. The newly established Aviation Design Institute (AvDI) at Pakistan Aeronautical Complex (PAC) was officially tasked with the “designing, production and evaluation” work for the FGF.

In December 2017, the PAF CAS stated that Pakistan was “engaged with Chinese experts in manufacturing the next generation aircraft,” while adding that the MALE UAV and FGF will enter production in 18 months and five years, respectively. As per the CAS, 60% of the staff involved in Project Azm are civilians.

At the 2017 Dubai Air Show, PAC Chairman Air Marshal (AM) Ahmer Shahzad told the Khaleej Times that PAC was interested in producing a commercial commuter aircraft with a seating capacity of 10-30 passengers. Citing a forecasted increase in domestic and regional air travel, AM Shahzad believed that a commuter aircraft that is “cost-effective, with sustained logistics and maintenance” would be a viable and attractive prospect for the domestic Pakistani market and foreign markets, namely Africa and Central Asia.

In September 2017, ACM Sohail Aman called upon Pakistan’s private sector to participate in the country’s aviation sector. Although a start has been made with sourcing some inputs for the JF-17 from the private sector (starting with “non-technical” components such as rubber and cables), the intention to expand that scope through Kamra Aviation City and, ostensibly, Project Azm. In July 2017, the PAF CAS stated, “…the plan of Aviation City has sponsorship of the Government of Pakistan for including the country’s industry as a downstream body … let Pakistan’s aviation industry grow and thus support the country’s economy.”

Currently, there is a significant gap between Pakistan’s stated aspirations and the reality – be it its aviation design, development and manufacturing capabilities or the willingness of the private sector to participate. However, by strongly tying its next-generation fighter program to domestic sourcing, the PAF appears to be raising the possibility of sustained and long-term high-value work for prospective Pakistani suppliers. Granted, Pakistan’s fiscal state will be the main guarantor or determiner of viability, but the FGF could potentially spur private sector investment in materials, aerostructure and electronics development and manufacturing. This is contingent on both domestic orders and ensuring that a sizable portion of the FGF supply work is open to the private sector (instead concentrated in the public sector).