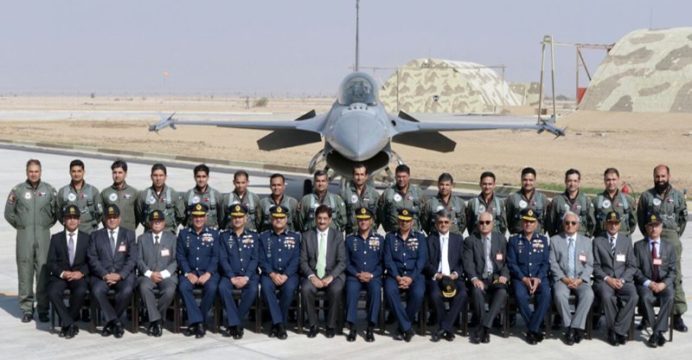 In his inauguration speech, the PAF’s Chief of Air Staff (CAS) Air Chief Marshal (ACM) Sohail Aman stated that the new base would enable the PAF to support the Pakistan Army “more efficiently.” The CAS added that PAF Bholari will also “augment and supplement” the Pakistan Navy’s operations.

Located in Thatta District in Sindh, northeast of Karachi, construction of PAF Bholari began in December 2015. At that time, the current CAS of the PAF had implied that PAF Bholari’s focus would be on the “conventional threat” – i.e. the PAF’s traditional focus on India.

The PAF’s Southern Air Command (SAC) hosts a comprehensive suite of assets for air defence, strike and maritime operations. In recent years, SAC has seen the introduction of a JF-17 Thunder multi-role fighter squadron (i.e. No. 2 Squadron at Masroor Air Base in Karachi) and the ZDK03-based Karakoram Eagle airborne early warning and control (AEW&C) aircraft. PAF Shahbaz in Jacobabad, Sindh also hosts the No. 5 Squadron’s F-16C/D Block-52+ squadron. The PAF’s MBDA Excoet anti-ship missile (AShM)-configured Mirage 5PA continue to operate from Masroor along with the No. 2’s C-802 AShM-armed JF-17.

In line with the CAS’ statements from PAF Bholari’s inauguration, the new MOB is located within reach of the Pakistan Army’s expected combat theatres in southeast Sindh. Likewise, PAF Bholari is within 150 km of Karachi and Pakistan’s littoral waters. Currently, Pakistan has a number of options for how to set-up Bholari, which can include assigning current and forthcoming JF-17 squadrons, the ZDK03 and/or Erieye AEW&C and – considering maritime operations are a factor – in-flight refueling tankers. During the inaugurating ceremony of the MOB the PAF held a flypast with four F-16s from the No. 19 Squadron, which operates the F-16A/B Block-15ADFs (Air Defence Fighter) acquired from Jordan. It is currently unclear if these will permanently operate from Bholari.