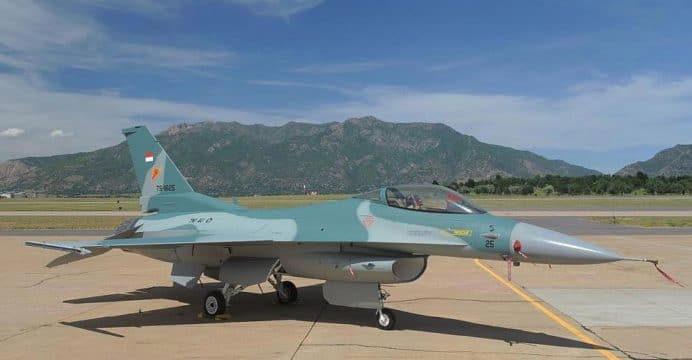 Originally, the TNI-AU was to receive six ex-U.S. Air Force (USAF) F-16C/Ds (the final batch from an order of 24 aircraft in 2011). However, two of the fighters experienced engine troubles and had to be grounded at Hawaii. Air Commodore Samsul Rizal told the Jakarta Post that those F-16s will undergo repair work.

Indonesia ordered 24 ex-USAF F-16C/D Block-25s through the Excess Defence Articles (EDA) program in 2011. Under the $750 million U.S. deal (designated Peace Bima-Sena II), the F-16s were refurbished and upgraded with subsystems from the Block-50/52. The original contract notice did not specify if new radars (e.g. AN/APG-68v9) or the Joint Helmet Mounted Cueing System (JHMCS) were also being procured.

In 2015 and 2016, Indonesia ordered 30 AIM-9X-2 high off-boresight air-to-air missiles (HOBS-AAM) and 36 AIM-120C7 beyond-visual-range air-to-air missiles (BVRAAM), respectively. The procurement of these munitions could indicate plans on the TNI-AU’s part to further upgrade the F-16s.

The Block-25 was among the USAF’s Pratt & Whitney (PW)-powered F-16C/Ds, along with the Block-32, 42 and 52. These were inducted in fewer numbers than the General Electric-powered Block-30, 40 and 50, hence making their availability on the surplus market relatively uncommon.

In tandem with the F-16s, the TNI-AU is also planning to procure 11 Sukhoi Su-35 Flanker-E fighters from Russia’s United Aircraft Corporation. Under the $1.14 billion deal, Russia agreed to procure $570 million in commodity goods from Indonesia and invest $400 million in the country’s aircraft maintenance, repair and overhaul industry. The Flanker-Es will join the TNI-AU’s 11 Su-30MK/MK2 and five Su-27SK/SKM.