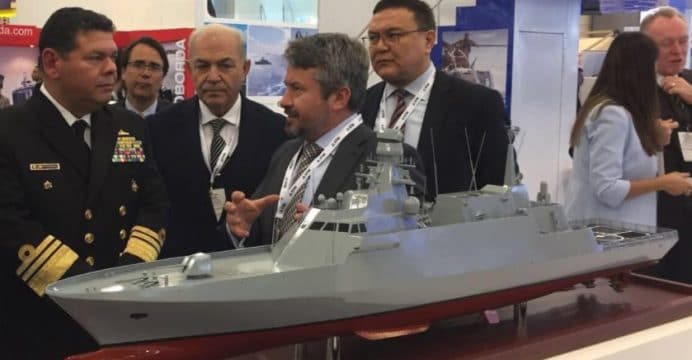 Speaking to Mönch, STM marketing official Dr Erdem Tümdag outlined that STM will use Colombian design and engineering assets to bring the CF3500 to fruition for the Colombian Navy. If the CF3500 is selected for the PES, STM will partner with Cotecmar Shipyard in Colombia to construct eight ships.

The remaining specifications, such as displacement, length, breadth, range or endurance, are not known, though they are likely to be comparable to that of the I-Class frigate being built for the Turkish Navy. Based on STM’s naming conventions, the CF3500 is likely to have a displacement of 3,500 tons.

DCNS is proposing its 4,000-ton BELH@RRA (Belharra) frigate, which is envisaged to serve as a bridge between DCNS’ 6,000-ton FREMM and 2,500 to 3,000-ton Gowind designs. The DCNS BELH@RRA is likely to include sensors and munitions from Thales and MBDA, respectively.

STM is the sole body authorized by the Turkish government to market and export the MILGEM.

Currently, many of STM’s major export contracts are from Pakistan, which signed onto a 17,000-ton fleet tanker, an upgrade program for its Agosta 90B submarines and a hydrographic/oceanographic survey and harbour design program for a naval base in Ormara.

STM is negotiating with Pakistan for the sale of four MILGEM Ada corvettes. In November, STM General Manager Davut Yilmaz told MSI Turkish Defence Review, “Technical negotiations are still under way … it is planned to progress and finalize all aspects of the contract negotiations.”

Pakistan’s Minister of Defence Production Rana Tanveer Hussain stated, “The process is completed and construction of the ship will start in the near future.” The MoDP also said that two of the ships would be constructed at Karachi Shipyard & Engineering Works (KSEW).