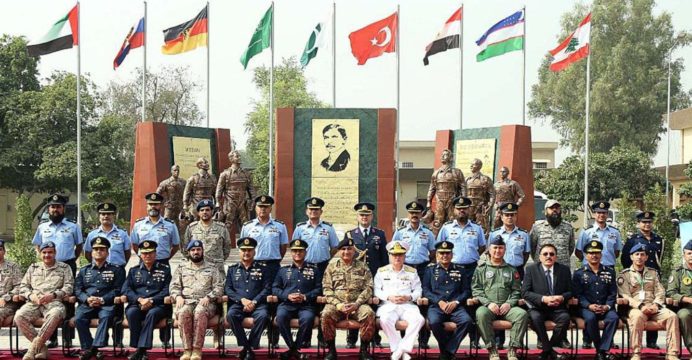 On numerous occasions, the PAF has highlighted its successes in COIN and CT air operations, especially in terms of building a pervasive intelligence, surveillance and reconnaissance (ISR) net, which the PAF credits to the successes the Pakistan Army met whilst fighting in the Federally Administered Tribal Areas (FATA).

To impart its experience within itself and to friendly air forces, the PAF established the Airpower Centre of Excellence (ACE) in 2016. It appears that ACES MEET was held in relation to the ACE initiative.

However, seeing that land forces operations are an integral to COIN/CT, even in terms of airpower if the use of attack and/or transport helicopters are considered, it would be prudent for the Pakistan Army to factor into ACE in some capacity. In fact, Army Aviation functions such as close air support, inserting and extracting special operations forces and medical evacuation are relevant to COIN/CT. Integration with the Army would be a prudent course for ACE’s growth, especially if COIN/CT is ACE’s principal focus.

Finally, though the PAF itself has eschewed the use of dedicated COIN air platforms, such as the EMB-314 or A-29 Super Tucano, AT-6 Wolverine and IOMAX Archangel, many of its overseas partners – among them the TuAF, RSAF and Nigerian Air Force – are pursuing such platforms to support their COIN strategies. It will be interesting to see how the PAF approaches the claimed advantages of these turboprop platforms in its own training and operational regimen. It could provide alternate approaches (e.g. emphasizing the timeliness and accuracy of air strikes) or replicate those capabilities using other assets, such as drones.