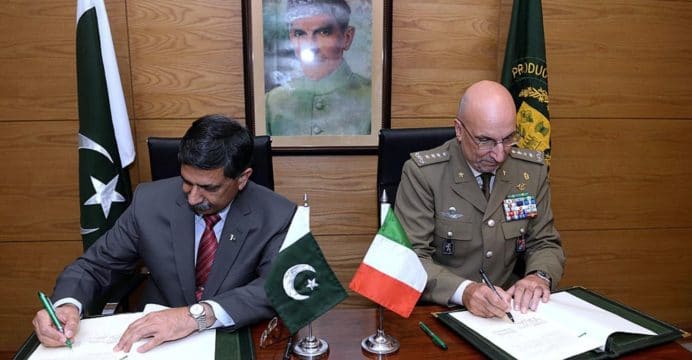 Pakistan’s Defence Minister Khurram Dastgir Khan also had a three-day official visit to Rome on invitation by his Italian counterpart Roberta Pinotti, during which he visited various defence vendors.

With the completion of the 11th JCDS meeting, the two sides agreed to strengthen cooperation in defence production. Lt. Gen Falsaperna and the Secretary of Pakistan’s Ministry of Defence Production (MoDP) Lt. Gen (retired) Muhammad Ijaz Chaudhry signed an agreement.

The Italian defence industry had identified several potential opportunities in Pakistan. At the International Defence Exhibition and Seminar (IDEAS), which was held in Karachi, Pakistan in November 2016 Leonardo displayed its Vixen 1000E active electronically-scanned array (AESA) radar, aiming to pitch the radar to the PAF for use on the JF-17 Block-III. It is unlikely that Pakistan will acquire the Vixen 1000E as integration with the SD-10, the JF-17’s main air-to-air missile, will necessitate the transfer of source-codes between Selex EX and Chinese parties. Elettronica’s EDGE Escort Jamming Pod, which is ITAR (International Traffic in Arms Regulations)-free, could be of interest provided the JF-17 Block-II/III has such a need.

The small-arms maker Beretta had exhibited its ARX-200 battle rifle and ARX-160 assault rifle at IDEAS as well, aiming for a possible Pakistan Army standard-issue rifle tender. The status of the Army rifle program is not known. In 2016 Pakistan Ordnance Factories (POF) signed a memorandum-of-understanding (MoU) with Sir Meccanica, a provider of machining hardware for manufacturing. Italy will have a role in POF’s modernization efforts. In February 2017, POF also signed a letter-of-understanding (LOU) with Beretta to market Beretta’s goods in Pakistan.

Pakistan’s interests are unclear, though Italy’s consistent willingness to engage should have an impact in Islamabad seeing the general precariousness of Pakistan’s defence ties with Western suppliers. Italy is an exception in that respect. Besides discussing possible purchases to Pakistan, Italy has also been willing to engage with the Pakistani defence industry. At IDEAS 2016, the Italian ammunition maker Fiocchi signed a LOU with POF to explore sourcing brass and gliding metal clad steel from POF. These initiatives can be an opportunity for Pakistan to link major acquisitions to commercial offsets (e.g. pushing for POF to join the Italian industry’s supplier channel).