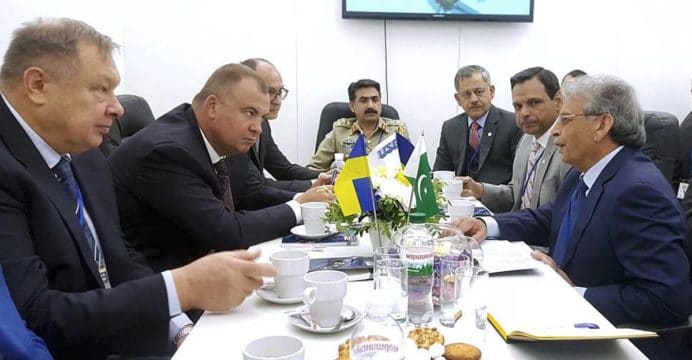 According to a press statement released by the Pakistani government, the delegation had met with Oleg Gladkovskiy, the First Deputy Secretary of National Security and Defence Council of Ukraine as well as Chairman Inter-Agency Commission on Military-Technical Cooperation and Export Control of Ukraine.

Besides broadly calling for growth in bilateral defence and defence production ties, the two sides sought to “explore … new avenues to enhance the bilateral relations especially in the field of defence production for joint venture with Heavy Industries Taxila and Karachi Shipyard & Engineering Works.”

HIT and the Defence Export Promotion Organization (DEPO) are also exhibiting at Arms and Security 2017.

Pakistan is a major market for the Ukrainian defence industry. In 2016, HIT signed a $600 million U.S. memorandum-of-understanding (MoU) with its Ukrainian counterparts for various tank maintenance and modernization programs in Pakistan. In addition, HIT bought 200 6TD-2 diesel engines for the al-Khalid-series main battle tank (MBT). Pakistan’s Ambassador to Ukraine Maj. Gen (retired) Athar Abbas had also suggested that the Pakistan Army could acquire 100 Oplot-M MBTs. The Malyshev Factory in Kharkiv reportedly prepared an evaluation unit for Pakistan under the designation of “Oplot-P.”

Currently, the mainstay of bilateral defence collaboration between Pakistan and Ukraine is based on heavy armour, most notably MBTs such as the al Khalid and al Zarrar. This could continue in the long-term with Pakistan engaging Ukraine for critical technologies, such as tank engines (e.g. the 1,500 hp 6TD-3) and for technical collaboration in the development of armour technology.

However, with Kiev ostensibly committed to rebuilding the Ukrainian military and, in tandem, revitalizing the Ukrainian defence industry, there may be additional opportunities for bilateral cooperation. Possible areas could include collaboration in munitions development, research in radars and electronics and space technology development (e.g. satellites).