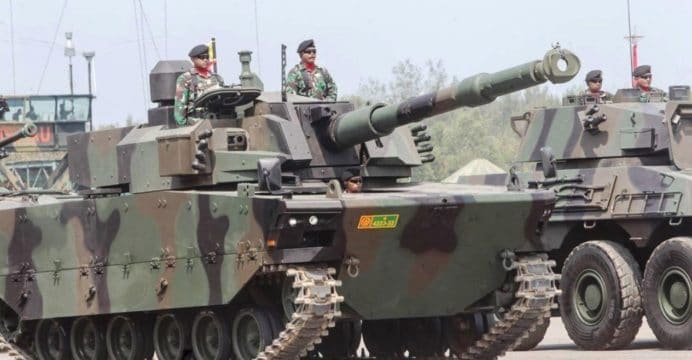 The Kaplan MT was collaboratively developed by Indonesia’s PT Pindad and FNSS Savunma Sistemleri from Turkey under the TNI-AD’s Modern Medium Weight Tank (MMWT) program. Development began in 2014, with the design work completed in November 2016 and first prototype delivered in September 2017.

“This project is the proof that we can produce high technology defense vehicles with our own efforts without being dependent on other countries,” said Abraham Mose, Chairman of PT Pindad.

Based on FNSS’ Kaplan chassis, the Kaplan MT is equipped with a CMI Cockerill 3105 turret armed with a Cockerill 105 mm main gun, autoloader and digital fire-control system. It also has a 7.62 coaxial machine gun, battlefield management system and laser warning system.

The Kaplan MT is being marketed as a support solution suitable for attacking light armoured vehicles along with flanking and ambush roles. Competing solutions include, among others, the NORINCO VT5 light tank.

FNSS is also competing for the Turkish Army’s launch contract of 250 Altay main battle tanks (MBT). The Altay was designed and developed by Otokar, but the Turkish government opted not to issue Otokar the Altay’s production contract.