Discussion: Can Pakistan collaborate with Turkey in helicopter production?
February 29, 2020 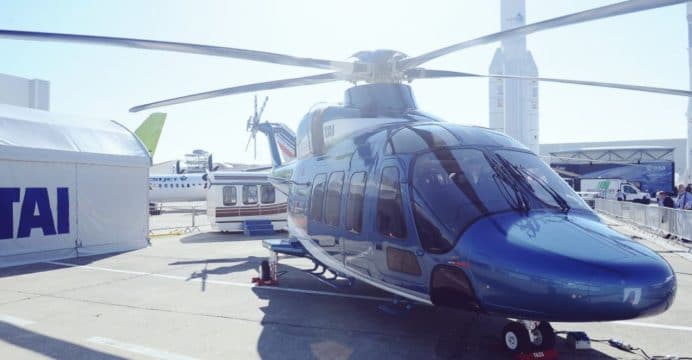 Discussion: Can Pakistan collaborate with Turkey in helicopter production?

Foreword: This is not a news story, but a piece for discussion. The details offered in this article are not authoritative pieces of information, but rather, opinions of the author.

In September, Turkish Aerospace Industries’ (TAI) General Manager Temel Kotil announced that TAI is in the process of developing new aircraft, among them a 10-ton general purpose helicopter to complement the T625 6-ton utility helicopter, which is expected to see its maiden test flight in September 2018. Shortly after unveiling the T625, TAI envisaged building a transport helicopter family comprising of original designs.

In parallel, the company is also engaged in the Turkish Utility Helicopter Program (TUHP), which involves the local licensed production of the S-70i Black Hawk. Under the T-70 designation, TAI also acquired rights to export the T-70 to third-party customers. However, with a maximum take-off weight (MTOW) of 10 tons, TAI’s new program would basically duplicate the core dimensions, capabilities and roles of the T-70.

Though the Pakistan Air Force (PAF) and Pakistan Army procured a number of Leonardo AW139 utility helicopters for search-and-rescue (SAR) missions (the aviation journalist Alan Warnes reported that Pakistan selected the AW139 over the S-70), the AW139 is a 6-7 ton design. It is not a directly analogous solution for supplanting the Army’s 7+ ton Puma or the Pakistan Navy’s 9-10-ton Sea King helicopters.

It does not appear that either has a successor on the immediate roadmap. In fact, the Pakistan Navy is reinforcing its Sea King fleet with three additional flying aircraft and upgrades, which include the Leonardo SeaSpray 5000-series active electronically-scanned array (AESA) radars (IHS Jane’s). However, as these are aging platforms the cost-effectiveness of flying them will gradually diminish as fewer centres are available to rebuild them and newer engines and platforms become more ubiquitous.

TAI’s 10-ton utility helicopter program can offer Pakistan an opportunity to stage a long-term solution to supplant the Puma and Sea King helicopters. The principal avenue for engaging would be through Pakistan Aeronautical Complex (PAC), which is already assuming helicopter-support work, such as a maintenance, repair and overhaul (MRO) site for Pratt & Whitney Canada PT6 turboshaft and turboprop engines and – if negotiations with TAI come to fruition – production of parts for the T129 attack helicopter. It would also reinforce the Kamra Aviation City initiative, which aims to significantly expand Pakistan’s aircraft manufacturing and aviation services base over the long-term.

For PAC, participating in the TAI program would not be for its own sake, but to produce a solution that supports the domestic industry, is accessible for customization (in terms of subsystems and weapons), and free of end-user restrictions in terms of use and deployment. In effect, it would be the same rationale as that of the PAF and Project Azm, which aims to free – or greatly minimize – Pakistan’s dependence on foreign suppliers for next-generation combat aircraft.

Flight International’s World Air Forces (2017) estimates that the Pakistan’s Army and Navy are operating 45 Puma and six Sea King helicopters (not including the additional batch being prepared by U.K.-based Vector Aerospace), respectively. Replacing them on a one-to-one basis with analogous aircraft available on the market, especially from the West, could incur a significant cost. For reference, a 2015 deal for nine UH-60M for Saudi Arabia had a price (including support) of $495 million U.S. – i.e. $55 million. The AW101 from Leonardo, which is generally marketed as a Sea King successor, has a markedly higher price. In effect, importing such solutions from the West is infeasible for Pakistan. Instead, Pakistan could aim to channel the large-scale investment for new utility or multi-role helicopters to its local economy.

In August 2016, Quwa had discussed the ingredients necessary for setting up the production of helicopters in Pakistan. In this article, the Navy and Army’s respective requirements were amalgamated into a single requirement (so as to justify scale), but in reality, a standard platform is difficult to materialize.

The Navy and Army manage distinct operational realities. For example, the Navy requires airframes that have a high level of resistance to corrosion. Moreover, these may need to be equipped with relatively sophisticated self-protection suites to guard against anti-air warfare (AAW) threats, the Sea Kings are capable of firing anti-ship missiles (AShM). However, the Army has a spectrum of needs which range from relatively thinly-equipped helicopters for purely transport and logistics to versions with countermeasures suites and/or armaments for combat SAR (CSAR) and special operations forces (SOF) missions.

Ultimately, Pakistan can only engage TAI if the respective headquarters of each service arm (PAF included) agree to a platform. In effect, the core design would need to meet the needs of each arm, and the specific characteristics of one branch can add to the cost of the whole program (e.g. corrosion-resistance). It must be noted that TAI itself has the T-70 to position for defence requirements, so it is unclear if this domestic design would be steered to complex requirements. Rather, TAI itself may have the incentive to keep the design as simple as possible so as to make it attractive to commercial and cost-sensitive defence users.

There is certainly an element of risk in partnering on a new development, especially in aviation and with a new entrant in the helicopter design and development space (i.e. TAI). Moreover, PAC would enter with even less experience (if any) to bring to the table. However, Pakistan can leverage its domestic market to help generate secured scale for TAI’s helicopter, whilst partnership funding can lighten the overhead on TAI. It would be premature to say that this would be the cheaper alternative from a budget or fiscal view, but the costs incurred in the production of these helicopters would be spent in Pakistan. The helicopter program would serve as a stimulus in the economy instead of an exit of foreign currency.

This is certainly not the perfect opportunity, but it may be a valuable one provided Pakistan can identify enough overlap between TAI’s design and its domestic military – and possibly even civil services – needs. The TAI program being in its infancy (if not less developed) bodes well for the situation seeing that Pakistan itself is in no apparent rush to replace the Sea King or Puma. Besides fulfilling future requirements through expenditure in domestic industries, the program might also broach the global aviation market, thereby opening Pakistan to engage in production for customers in third-party states.