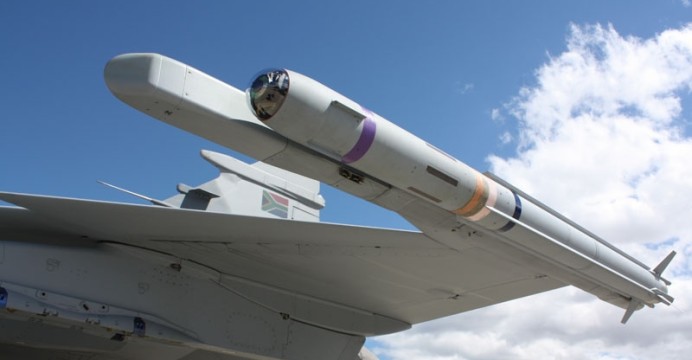 Defence Web reports that Denel Group SOC CEO Odwa Mhlwana admitted that the company’s dwindling order book “is a cause for concern,” but affirmed that efforts were underway to replenish its forthcoming orders in the short-term.

Mhlwana outlined that Denel has opportunities valued at ZAR 40 billion ($3.10 billion U.S.), of which half or more can be brought to fruition and translated into firm orders in the near-term. Denel aims to maintain an order book of at least ZAR 30 billion ($2.3 billion).

To mitigate cost, Denel is internally reorganizing its various subsidiaries. It merged Denel Aerostructures and Denel Aviation to create Denel Aeronautics. Mhlwana claimed this resulted in cost savings. Denel will also work to accrue cost savings from its suppliers.

The company is struggling to maintain healthy liquidity. This is a result of current export orders, notably that of Malaysia, conditioning payment to Denel upon the delivery of the system. Denel may change the terms of its contracts to better support its operating expenses.

Since 2010, the United Arab Emirates (UAE) has been Denel’s leading customer in the Middle East. Denel Dynamics and Denel Vehicle Systems (DVS) are maintaining large-scale programs in the country.

In 2010, the UAE placed a $173 million for Denel Dynamics’ Umbani precision-guided bomb (PGB) kit for the Mirage 2000-5/-9. The Umbani PGB not only provides general purpose bombs (GPB) with semi-active laser-homing seekers, but also provides stand-off range extension options in-excess of 100 km (an ‘Extend Range’ variant of the Tariq/Umkhonto can reach 200 km).

Denel has been supplying the Umbani (renamed ‘Tariq’) in partnership with UAE-based Emirates Defence Industries Company (EDIC), with whom Denel maintains a jointly-owned subsidiary in Tawazun Dynamics. In 2014-2015, the UAE issued a $38.4 million in 2014 follow-on order for the Tariq PGB.[1]

In 2015, DVS signed a $63.6 million contract with EDIC’s NIMR Automotive to co-produce the N35 mine-resistant ambush-protected (MRAP) vehicle for the UAE. As per Defence Web, DVS is in talks with a Middle East customer for a follow-on order worth five times the original deal. It is not clear if this is the UAE.[2]

Denel has been seeking additional large markets, among them Pakistan. Denel Land Systems had sent its T5-52 155 mm 52-calibre self-propelled wheeled howitzer to Pakistan for tests, where it claims the T5-52 had performed well. The T5-52 was also presented at Pakistan’s biennial defence exhibition IDEAS, which was held in Karachi in November 2016. In 2015, the Pakistan Air Force (PAF) listed the Denel Dynamics A-Darter as a high off-boresight (HOBS) air-to-air missile (AAM) option for the forthcoming JF-17 Block-III.[3]

It is not known where Denel stands in terms of landing Pakistani contracts, but in March 2017, South Africa and Pakistan signed a bilateral memorandum-of-understanding (MoU) for enhancing defence ties. The MoU’s language was comprehensive, including arms trade, wherein it called for acquisition, cooperation in research and development, transfer-of-technology, co-production and joint-ventures.

With apparent regulatory backing, Pakistan should be able to engage. Granted, fiscal capacity is limited, but much less so with South Africa (and the South African Rand) than the U.S. Dollar, Euro or Pound. Co-production can also enable Pakistan to spend a sizable portion of an acquisition domestically. Seeing its approach with the UAE, it seems Denel is amenable to such an avenue.

Seeing the scale of Pakistan’s arms procurement, which can involve arming the JF-17 multi-role fighter, modernizing artillery, arming naval vessels, acquiring light armoured vehicles and even equipping infantry with new small arms, Denel could have a sustainable long-term market in Pakistan. Longer term points of access could include supply or technical support work for Project Azm, under which PAC is developing a medium-altitude long-endurance (MALE) drone and will pursue a 5th-generation fighter (the MoU called for enhanced collaboration between PAC and Denel Aeronautics).