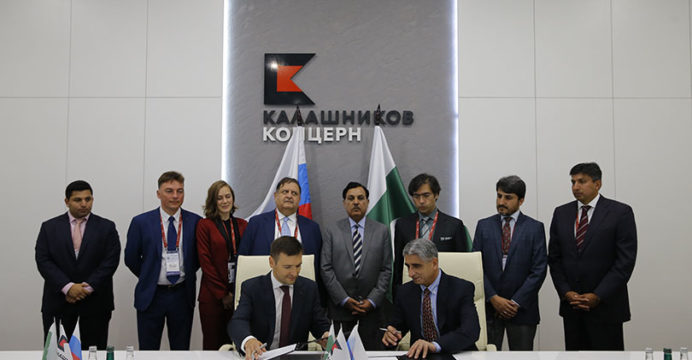 In the Pakistan Army’s assault rifle evaluations in 2016, Kalashnikov’s AK-103 was among the weapons the Army had evaluated. Russian news outlets had even reported of a large AK-103 order from Pakistan.

The Kalashnikov LoU mirrors the LoU POF had signed with the Italian firearms maker Beretta during IDEX 2017 in Abu Dhabi in February. Like the Kalashnikov LoU, the Beretta LoU called on both parties to jointly promote the sale of Beretta pistols, shotgun and apparel in Pakistan.

Currently, the only LoU that was closely related to the Pakistan Army’s next-generation assault rifle needs was POF’s LoU with the Czech firearms maker Česká zbrojovka (CZ).

The CZ LoU called for both companies to “intensively negotiate a delivery of complete technology for the production of small arms … [with] gradual launching of production in Pakistan, ranging from light assembly to maximum localization.” CZ confirmed the LoU in April during a marketing demonstration in Baluchistan.

Nonetheless, the Kalashnikov LoU provides the venerable Russian firearms maker with a formal gateway to access the Pakistani market. The LoU also calls for Kalashnikov and POF to establish “brand-zones … in Pakistan for the implementation of [Kalashnikov] civilian small arms.”

Interestingly, Pakistan also has a base of informal small arms producers in Darra Adam Khel, which cater to some civilian buyers (benevolent and otherwise). It is no longer at its peak, but the government has an opportunity to tie remnant and aspiring makers to foreign brands. Instead of simply importing weapons, Kalashnikov (and other) arms for local consumption can be co-produced locally (under strict regulations). While these LoUs will expand the legal and safe pool of firearms, they will add to Pakistan’s imports and foreign currency outflows unless they are tied to existing industry efforts.

It is unlikely that Kalashnikov’s commercial interests in Pakistan are restricted to the latter’s civilian small arms market. Rather, the Pakistan Army’s expansive – and perennial – need for assault rifles, side arms, sniper rifles, machine guns, body armour and specialist equipment (such as motorcycles for special forces units) is where Kalashnikov stands to make its greatest gains.