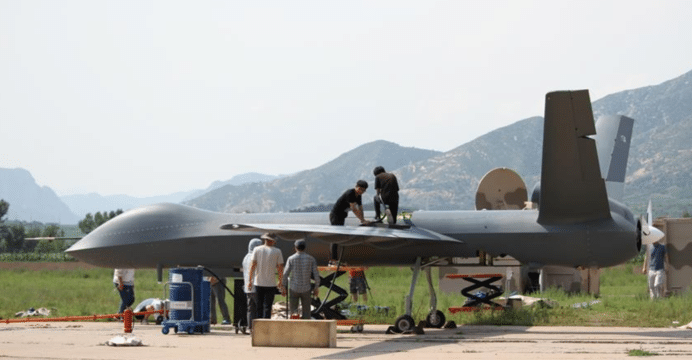 Could the CASC CH-5 UAV be an option for Pakistan?

On Friday July 14, the China Aerospace Science and Technology Corporation (CASC) announced that it was ready to mass-produce and offer its CH-5 drone for export.

The new medium-altitude and long endurance (MALE) unmanned aerial vehicle (UAV) is among a handful of drones – along with the General Atomics MQ-9 Reaper and Israel Aerospace Industries (IAI) Eitan –capable of carrying more than 1,000 kg in munitions and electronics equipment.

However, unlike the Reaper and IAI Eitan, the CASC CH-5 appeals to a larger market, i.e. countries not privy to the defence industry access available to those aligned with NATO and the United States. One of those countries is Pakistan, China’s leading importer of big-ticket defence items, which include fast attack crafts, frigates, submarines, fighter aircraft and more.

With these specifications, the CH-5 is much larger than the drones China has been exporting to date, be it the Rainbow or CH-series from CASC or the Wing Loong platform produced by the Chengdu Aircraft Industry Group (CAIG). Outside of the U.S., Israel and Western Europe, the CH-5 is also the largest drone available, especially to CASC and CAIG drone users in the Middle East, South Asia and Africa.

Pakistan’s current inventory of UAVs comprise of tactical – i.e. short-range and light capacity – units, such as the Burraq, Shahpar and others. With a MTOW 480 kg, the Shahpar has a payload of 50 kg for electro-optical and infrared (EO/IR) equipment and endurance of less than seven hours. The Burraq is thought to have a payload of 100-200 kg, which can be distributed between EO/IR equipment and munitions. Official information regarding the Burraq’s range and endurance is not available, but even if it is at-par with the Turkish Aerospace Industries (TAI) Anka, it would still be 24 hours (versus the CH-5’s 60 hour-endurance).

Given these specifications, it seems that the Burraq and Shahpar are deployed to support specific combat engagements, such as airstrikes or building situational awareness through intelligence, surveillance and reconnaissance (ISR) over a localized combat area. If Pakistan were to acquire the CH-5, it would not deploy them for the tactical roles currently assumed by the Burraq and Shahpar. Rather, the CH-5 would (if acquired) be sought for its loitering, range and payload, which would place it in roles that are currently managed by manned platforms, such as special mission aircraft.

Granted, the CH-5’s complete range is accessible through satellite communications (SATCOM) connectivity, but SATCOM is an acquirable (though costly) piece. If SATCOM is in place, Pakistan can deploy the CH-5 as a long-haul ISR asset for monitoring its coastal areas and exclusive economic zone (EEZ) at sea. Pakistan can also use the CH-5’s endurance and range for ISR operations along its borders, which can help build strategic situational awareness and provide another early warning layer (especially against asymmetrical threats). The CH-5’s payload can be leveraged for EO/IR equipment for targeting and image intelligence, synthetic aperture radars with ground moving target indicator for situational awareness of the terrain (SAR/GMTI), and electronic intelligence (ELINT) and electronic warfare (EW) equipment for support roles.

While not as individually capable as these dedicated platforms, the CH-5 would be cheaper to acquire and operate. This can enable the armed forces to field CH-5s in greater numbers and use the drones to fill surveillance coverage gaps, loiter over areas of interest for several days and/or provide manned platforms with additional information (e.g. send SAR/GMTI feeds to friendly combat aircraft).

The CH-5 is also disposable (lacking a crew and being lower-cost), enabling the armed forces to potentially deploy the drone in high-threat environments, e.g. in proximity to an opposing integrated air defence system, which can occur if the CH-5 is deployed as an EW support asset.

Besides broadening Pakistan’s ISR capabilities, the CH-5 could even serve as an effective close air support (CAS) assets if its 1,000-kg external load is made to comprise of precision-guided bombs and air-to-surface munitions. However, it is not yet clear if Pakistan is interested in the CH-5. CASC said it was speaking to existing CH-series customers, which can theoretically include Pakistan (as the Burraq appears to be a licensed derivative of the CH-3A), but Pakistan Aeronautical Complex’s Aviation Design Institute (AvDI) also has a MALE UAV in development (specifically in the final design stages).

The MALE UAV scope is broad. It can include drones as large as the CH-5 and drones as small as the CH-4B. The latter category could be in the realm of AvDI’s design and development capacities, which can spur a design that is a natural tactically-oriented successor to the Shahpar and Burraq. If AvDI’s MALE UAV is an analogous solution to the CH-4B or TAI Anka, then there may be space for a CH-5-like solution, albeit if Pakistan is truly intent on building long-range ISR and long-haul loitering capacities through drones.