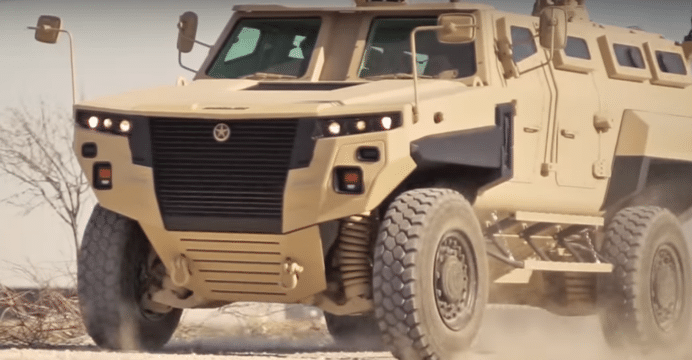 However, besides promoting the Pusat’s versatility, Tümosan had also highlighted the use of its own engine and transmission technology in the Pusat. This is unique in the industry, especially among new or non-Western military vehicle suppliers, which generally bind partial domestic design work to imported components, especially critical systems such as engines and transmission.

Instead, Tümosan opted to serve as an end-to-end supplier for the Pusat by sourcing the vehicle’s hull, engine, drive-line, transmission and suspension systems internally. Tümosan’s goal is to offer a versatile military vehicle with complete supply-side independence.

The Pusat has a gross weight of 10 to 12 tons. Its 250 hp Tümosan X 5.2-litre 4-cylinder diesel engine offers a maximum speed of 110 km/h with a range of up to 700 km. As per Tümosan (via Milliyet), this is a new generation engine aimed at providing 30% additional fuel savings over contemporary powerplants.

The Pusat uses independent suspension and central tyre inflation system to adjust tyre pressure against the terrain. Its transmission system comprises of the Dura 1300 AMT, an automatic transmission system with eight forward gears and one reverse gear via electro-hydraulic shifting.

Structurally, the Pusat uses a steel monocoque hull sufficient for defensibility against small-arms fire as well as a V-shaped floor for protection against mine and improvised explosive device (IED) blasts. Like its fellow Turkish competitors (e.g. the Nurol Makina NMS), the Pusat can be deployed in many roles, from troop transport, support fire, medical evacuation and internal security.

Tümosan unveiled a Pusat prototype at IDEF in May. According to Tümosan, the Pusat is undergoing tests, it is not known when the vehicle will be available for domestic and overseas sales. Tümosan is marketing the Pusat to the Turkish Armed Forces (TSK) and Turkey’s law-enforcement agencies.

Besides selling Pusat vehicles to domestic and foreign markets, Tümosan control over every part of the vehicle provides it with the flexibility to sell expertise and technical support. This could be a competitive asset should Tümosan decide to engage overseas light-armoured vehicles, such as Pakistan’s Light Armed Vehicle Assault (LAVA) program.

The following is Tümosan’s promotional video for the Pusat: