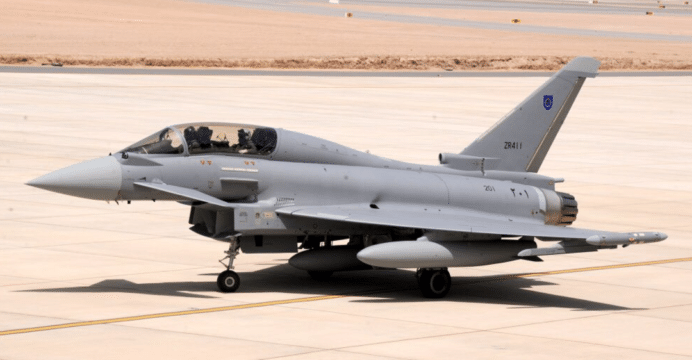 The Royal Air Force of Oman (RAFO) took delivery of its first two of 12 Eurofighter Typhoon from BAE Systems at its Adam Air Base on Wednesday, June 21.

BAE Systems rolled out the RAFO’s first Typhoon (and Hawk Mk. 116) from its assembly plant in Warton, Lancashire in May. Defense Aerospace reports that Oman will receive four additional Typhoons – three single-seaters and a dual-seater – by the end of 2017.

In June, BAE Systems also delivered the final two (of 72) Typhoons to the Royal Saudi Air Force. BAE has been pressing for additional orders to keep the Warton assembly line active past 2019 once Royal Air Force and RAFO orders are fulfilled.

Besides the prospect of a follow-on Saudi order for 48 planes, BAE Systems is pitching the Typhoon to Belgium and Finland, which have active bids to replace their F-16s and F/A-18s, respectively. It also offered the Typhoon to Malaysia, which had examined options for replacing its aging MiG-29s.

Given that the Eurofighter Typhoon is a consortium program, Italy’s Leonardo is serving as a parallel dealer for the platform. In September 2015, Kuwait inked a purchase for 28 Eurofighter Typhoon Tranche 3s from Leonardo. This contract will provide manufacturing work (i.e. canards, front fuselage, windscreen and canopy) to BAE Systems in the U.K., though final assembly will take place at Caselle in Italy.