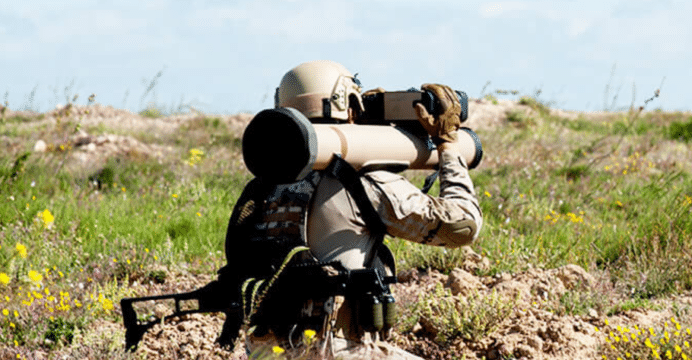 Instalaza lists the VOSEL (M2) as a reusable fire control unit with an integrated night vision-capable system that provides the gunner with a “future aiming point to maximize … hit probability” against moving targets. As per Instalaza, future aiming is attained by calculating the target’s position and trajectory, measuring the propellant temperature and calculating the projectile trajectory.

Instalaza marketed the Alcotán-100 at Pakistan’s biennial defence exhibition, IDEAS, in November. It had partnered with the Pakistani company Metal Engineering Works to market the system in Pakistan.

Unlike the Saab Carl Gustaf M3/M4 and even Instalaza’s C90, the Alcotán is a single-shot/use system. In other words, the rocket and rocket-launcher are one munition; once the rocket is fired, the launcher is discarded. However, the VOSEL (M2) sight is reusable. The advantage with these kinds of systems (as advertised with the similar Saab AT4) is that a single-shot system is cheaper – and simpler – to manufacture. Despite being a large-calibre munition (i.e. 100 mm) it is also relatively light, enabling the user to ferry the same by foot.

Munitions such as the Alcotán-100 are infantry-use weapons for multiple threats including, among others, enemy vehicles and bunkers. The optional Alcotán BIV (M2) and Alcotán ABK (M2) munitions provide dual anti-armour and fragmentation and anti-bunker capabilities, respectively.