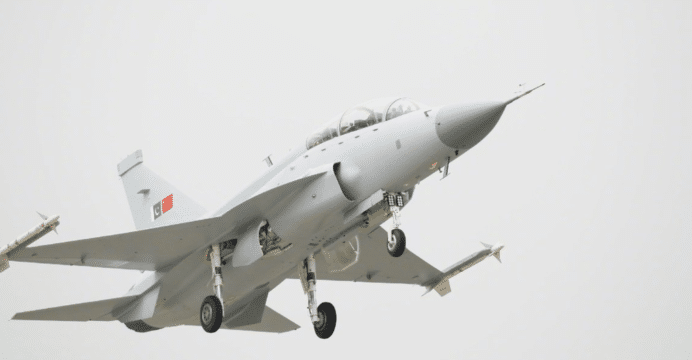 The Aviation Industry Corporation of China (AVIC) 607 research institute announced that it successfully completed the development of an air-cooled active electronically-scanned array (AESA) radar, which AVIC will pitch for the Pakistan Air Force’s (PAF) JF-17 Block-III as part of the fighter’s AESA fighter requirement.

The 607 institute, officially known as the China Leihua Electronic Technology Research Institute (LETRI), reportedly announced the news through WeChat.  LETRI is also the developer of the SD-10 beyond visual-range active radar-homing air-to-air missile in service with the PAF.

As per LETRI, its air-cooled AESA radar is a first of its kind. LETRI believes that its AESA radar will help offset the internal space and power limitations of many in-service fighters, providing these aircraft with an AESA radar that is easier to integrate than liquid-cooled systems, such as the competing KLJ-7A offered by the Nanjing Research Institute of Electronics Technology (NRIET).

The transceiver modules (TRM) of an AESA radar generate considerable heat that must be dissipated for the TRMs to function reliably (and not incur damage). This is currently done through liquid cooling, which necessitates additional space for the cooling system and additional electrical power. In contrast, the LETRI AESA radar draws from the cooling methods of current pulse-Doppler radars, which implies that this AESA radar can be fit to small aircraft with relative ease and at low-cost.

In Air Forces Monthly’s April 2017 issue, British aviation journalist Alan Warnes reported that two Chinese radars are competing for the PAF JF-17 Block-III contract – NRIET with its KLJ-7A and AVIC with LETRI’s radar. Space (for cooling) may not be a challenge for the JF-17 Block-III given that the JF-17B, embodies several of the JF-17 Block-III’s design attributes, most notably greater internal space through an enlarged nose and conversion to a triplex fly-by-wire flight control system (from the Block-I/II’s hybrid system).

The LETRI radar could potentially be a simpler affordable avenue for upgrading serving Block-I and Block-II. In fact, AVIC appears to be banking on that reality to secure orders – losing the Block-III to bid to NRIET or Leonardo would not preclude it from selling radars to the PAF. The PAF’s JF-17 Block-I/IIs would benefit from the benefits of an AESA radar without necessitating significant structural changes.