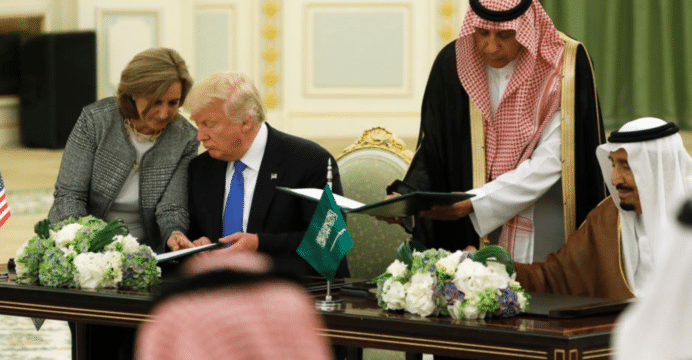 Saudi Arabia and the U.S. inked a $110 billion U.S. arms deal involving the sale of helicopters, air defence systems, guided munitions and other systems to Riyadh.

The landmark agreement was signed on President Donald Trump’s inaugural foreign visit since becoming the 45th President of the United States. This will be followed by $350 billion in sales over the next 10 years.

The MMSC is a development of the Littoral Combat Ship (LCS). In 2015, Lockheed Martin had proposed the MMSC to Riyadh for the latter’s corvette requirement. The original deal envisioned the sale of four MMSC for $11.25 billion. In early 2016, Riyadh balked at the deal and approached Spain’s Navantia for five Avante 2200 corvettes. Bloomberg reports that the new MMSC contract is worth $6 billion U.S.

Lockheed Martin signed a letter-of-intent with Taqnia to “form a joint venture to support final assembly and completion” of 150 Sikorsky S-70 Black Hawk utility helicopters. Lockheed Martin and Taqnia had held talks for the S-70i in 2016.

Through these agreements, Lockheed Martin states that it is playing a major role in Saudi Arabia’s Vision 2030 aim, which projects Saudi Arabia sourcing at least 50% of its defence hardware and services locally. Seeing the scope of the agreements, it is apparent that Vision 2030 is being pursued through commercial offsets, co-production and local maintenance, repair and overhaul (MRO). In bringing these programs to fruition, Lockheed Martin expects the creation of “thousands of jobs” in Saudi Arabia over 30 years.

The U.S. and Saudi Arabia will also sign an agreement for a $3.5 billion sale of 48 Boeing CH-47F Chinook transport helicopters. The Chinook program will join ongoing Boeing contracts in Saudi Arabia, such as the F-15SA, which Riyadh ordered in 2010 under a $29 billion purchase for 84 new-built and 70 upgraded jets.

In its press release, Raytheon states that it has signed a memorandum-of-understanding with SAMI. The company aims to engage in “Air Defense Systems, Smart Munitions, C4I Systems and Cyber Security of Defense Systems and Platforms.”

Raytheon’s business will also comprise of sales of surface-to-air and air-to-surface munitions for Saudi Arabia’s new surface warships (i.e. MMSC) and aircraft, respectively. For example, the MMSCs will be armed with Raytheon’s Evolved Sea Sparrow (ESSM) system. The sale of 16,000 Paveway laser-guided bomb kits is also expected to proceed, though these are not part of this recent umbrella agreement.

Like Lockheed Martin and Boeing, Raytheon intends to support Riyadh’s Vision 2030 plan by contributing to the creation of a “localized defence ecosystem with regional expert capabilities.” As part of this effort, Raytheon is establishing Raytheon Arabia, which will be a Saudi business wholly owned by Raytheon. Based in Riyadh, Raytheon Arabia will provide “in-country program management, supply and sourcing capabilities, improved customer access and centralized accountability.”

In terms of the hardware and services, the scope is comprehensive. Although analysts have noted the lack of an offensive element – i.e. multi-role fighter – it is worth noting that Saudi Arabia’s primary vendor for such systems is Boeing (i.e. F-15) and BAE Systems (i.e. Typhoon). Analysts believe that the sale of F-35 Lightning IIs would have jeopardized Israel’s qualitative edge in the region. Otherwise, the sale of the THAAD and PAC-3 outlines Riyadh’s intent to fortify its air defence coverage for defensibility against ballistic missiles (one of Iran’s mainstay offensive capabilities).

The MMSC is likely to be a first step towards a wider naval modernization effort. The MMSC is a multi-mission ship capable of anti-air warfare (AAW), anti-ship warfare (AShW) and anti-submarine warfare (ASW). The MMSC is an enlarged variant of the Lockheed Martin Freedom-class Littoral Combat Ship (LCS), which was designed to provide the U.S. Navy with a surface combatant for littoral waters.

Besides three al Riyadh-class frigates (i.e. variant of the DCNS La Fayette-class), Saudi Arabia’s fleet is comprised of frigates and corvettes built in the 1980s. These larger legacy combatants amount to eight ships, which in turn are supported by nine 495-ton al Sadiq-class patrol boats. The al Sadiq-class may necessitate a need for fast-attack crafts. In 2015-2016 Saudi Arabia intended to expand with an Eastern Fleet, which was to originally take on the MMSC. It is not known if Saudi Arabia will acquire additional MMSC (or LCS) ships or if it will pursue lower-cost ships from Spain and/or Turkey in tandem.

Each of these defence agreements has a commercial offset and local partnership element. Given the scope of Riyadh’s projected expenditure, it does not seem that original development, even in partnership with overseas vendors, is not currently a priority. Rather, the bulk of expenditure – even for Vision 2030’s sake – is being tilted towards off-the-shelf procurement with local industry workshare.

However, Saudi Arabia’s nascent industry will largely benefit from assembly, maintenance, integration and testing more so than native manufacturing and fabrication. This could potentially grow in the future (through the $350 billion in follow-on sales), but the current framework is geared to issue the balance of manufacturing work to the U.S. Lockheed Martin’s comparison of jobs creation in the U.S. (18,000) in comparison to that of Saudi Arabia (“thousands”) reflects that reality.