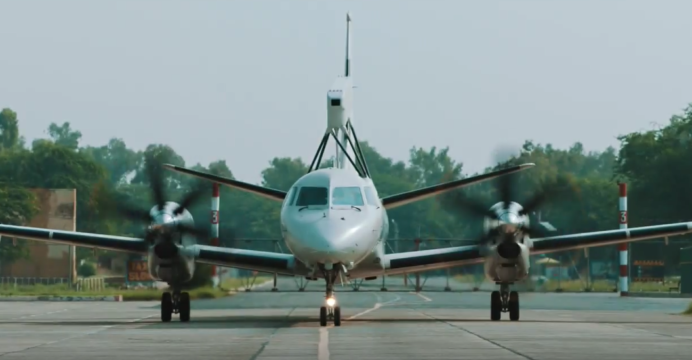 As per AFM, the first new Erieye AEW&C will be delivered in December, with the final two due for 2018.

These will join the PAF’s three existing Erieye AEW&C and four Y-8F600-based ZDK03 AEW&C – resulting in a total of 10 AEW&C aircraft by the end of this decade.

On May 15, Saab announced a $155 million U.S. order for its AEW&C business group with deliveries set to commence from 2017 and to conclude 2020. Saab expects the sale to be inked in six months, whereby financial and other conditions will be ‘fulfilled.’

Saab did not disclose the customer, which it had done for a prior United Arab Emirates (UAE) order. In light of recent information, it is possible that Pakistan is Saab’s latest customer.

The Erieye is a critical piece of the PAF’s air surveillance and early warning strategy. Centered on an active electronically-scanned array (AESA) radar, the Erieye provides stand-off range situational radar awareness to networked airborne and land-based assets. Saab positions the Erieye as an open platform, one that can communicate in Link-11, Link-16 and/or the end-user’s proprietary data-link protocol.

The PAF originally ordered four Saab 2000-based Erieye AEW&C in 2006. It had planned to acquire six, but the Kashmir Earthquake of 2005 resulted in a reduced order. Instead of six Erieye, the PAF augmented its four Erieye with four ZDK03 AEW&C – designated Karakoram Eagle – from China.

In August 2012, three of the four Erieye were heavily damaged in a terrorist attack on Minhas Air Base, which was at the time housing the No. 3 AEW&C Squadron. By 2016, Pakistan Aeronautical Complex (PAC) managed to restore two of the damaged aircraft. This new Erieye order will effectively replace the written-off unit as well as raise the PAF’s Erieye fleet to its originally planned force of six.

Specifics, such as whether the PAF selected the Erieye or new gallium nitride (GaN)-based AESA Erieye ER (which has 70% more range than the Erieye) or if these new aircraft include synthetic aperture radars (SAR) for ground surveillance and target acquisition, are not known. Interestingly, the recent Saab press statement mentions “border surveillance, search and rescue operations and … tracking terrorism” as use cases, this could be a possible indication of SAR and/or electro-optical and infrared equipment.

Seeing that the Saab 2000 was re-selected as the platform, it is likely that the PAF is opting to scale its existing logistics and maintenance infrastructure by adding identical equipment. Considering the level of technology infusion that was required to repair the two damaged Erieye, it will be worth seeing if this new order will entail local workshare for PAC.

Assuming Saab’s recent order is from Pakistan, it is unclear if the $155 m constitutes the value of the three Erieye AEW&C systems or if it is an installment. In 2006, Pakistan agreed to procuring six Saab 2000-based Erieye AEW&C with the requisite logistics, maintenance and training support package for SEK 8.3 billion – which was $1.15 billion in 2006. In 2007, Pakistan renegotiated the contract to omit two Erieye AEW&C, causing the contract to drop by SEK 1.35 billion, i.e. $186 million. This could indicate that the cost of each Erieye AEW&C (without its support package) was $93 million in 2007.

This order will raise Pakistan’s overall AEW&C fleet to 10 aircraft. However, in the mid-2000s the Pakistan Navy and PAF originally planned to acquire a total of nine AEW&C aircraft – i.e. six Saab 2000-based Erieye and three P-3 Orion-based Hawkeye 2000. The PAF could be aiming for that strength level, but with the ZDK03 in place of the Hawkeye 2000.