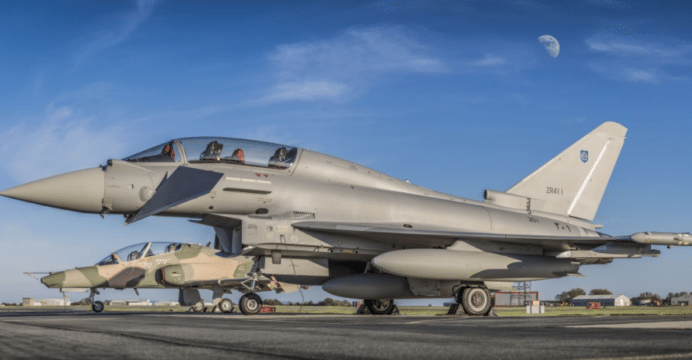 BAE Systems rolled out the first Eurofighter Typhoon multi-role fighter and Hawk advanced trainer at its Warton, Lancashire facility for the Royal Air Force of Oman (RAFO) on Monday, May 15.

Oman ordered 12 Eurofighter Typhoons and eight Hawk Mk. 166s in December 2012 under a $4.06 billion U.S. contract. The Typhoons were sought to replace the RAFO’s legacy SEPECAT Jaguars, while the Hawk Mk. 166 was bought to supplant the fleet’s Hawk 100s.

The Managing Director of BAE Systems Military Air & Information Chris Boardman celebrated the event, stating, “We believe that, in Eurofighter Typhoon and Hawk, Oman has added the most advanced combat jet and proven training aircraft available in the world to its military portfolio.”

Deliveries of the aircraft to Oman are scheduled to begin this year. The RAFO also operates 23 Lockheed Martin F-16C/D Block-50 (of 24 originally ordered).

The Eurofighter Typhoon and Hawk have a strong presence in the Gulf Cooperation Council (GCC) market, counting Oman, Saudi Arabia and Kuwait as current (or future) operators of both platforms. Bahrain and the United Arab Emirates operate Hawk variants.

Saudi Arabia, which is the largest Typhoon operator in the region with 66 (of 72) aircraft, is reportedly in talks with BAE for another 48 Typhoons. The platform is also being pitched for outstanding fighter bids in Malaysia, Belgium, Finland and Bulgaria, with the latter examining used Tranche 1s from Italy.