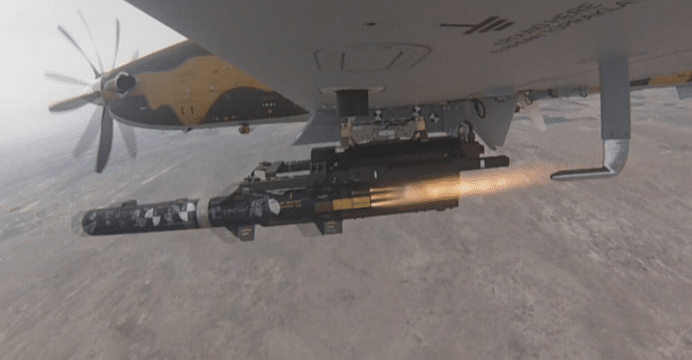 The Hürkuş-C is the armed variant of the Hürkuş basic trainer. Powered by the Pratt & Whitney Canada PT6A-68T turboprop engine, the Hürkuş-C can reach a top speed of 574 km/h and has a payload of 1,500 kg available through five external hardpoints.

The Hürkuş-C airframe was designed with armour reinforced airframe. Besides weapons, the lightweight attack aircraft can also be equipped with an electro-optical and infrared sensor and self-protection system for defensibility against infrared-guided surface-to-air missiles. It also has a modern glass cockpit, tactical data-link system, hands-on throttle-and-stick and onboard oxygen generation system.

The Roketsan UMTAS, also known as the Mizrak, is a semi-active laser-homing (SALH) ATGM. It has a range of 8,000 metres and weighs 37.6 kg. Besides SALH, the Mizrak could optionally be tipped with an imaging infrared terminal-phase seeker. The Mizrak could be configured with an anti-armour warhead or a high-explosive blast-fragmentation warhead.

Like the Embraer A-29 Super Tucano and IOMAX Archangel, the Hürkuş-C will be slotted as an aerial strike platform for low-intensity environments with minimal anti-air warfare (AAW) threats.

Turboprop aircraft are being marketed as low-cost alternatives to fast jets such as the Lockheed Martin F-16. Industry backers of the Super Tucano and Archangel cite substantially lower flight costs, coupled with the capability to still deploy many of the same munitions as fast jets, as major advantages.

The Archangel and Super Tucano have seen combat use in counterinsurgency theatres, most recently in the Middle East and Afghanistan, respectively. The U.S. Air Force will also examine several such aircraft this summer as part of its OA-X program.

The Turkish Armed Forces (TSK) are expected to induct the Hürkuş-C by the end of 2017. TAI is also marketing the Hürkuş-C for export, particularly to the Middle East and Africa markets.