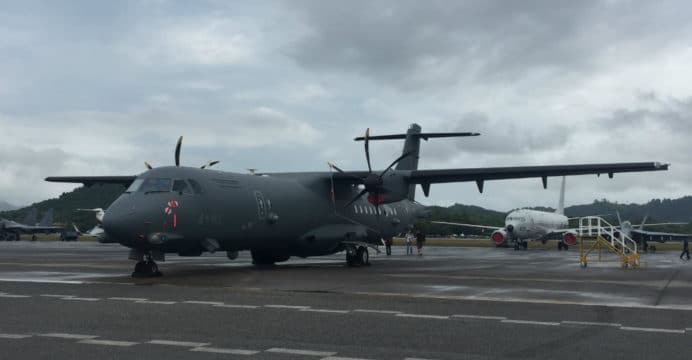 Both vendors are emphasizing low acquisition and operational costs with their respective MPA platforms.

With more than 900 aircraft built thus far, the ATR-72 is an ubiquitous platform. Its wide-scale adoption in the civilian airliner market speaks to its overall affordability, a factor Leonardo believes will translate to armed forces usage. Countries that are home to ATR-72 users, especially those with maintenance, repair and overhaul (MRO) facilities, can scale that infrastructure and add the ATR-72MP with relative ease.

Presently, there are three naval ATR-72 operators: Turkey, Pakistan and Italy. Interestingly, it appears that each operator has its own MPA version based on the ATR-72. The Leonardo ATR-72MP is centered on the company’s internal catalogue of subsystems, such as the EOST-23 multi-sensor surveillance and tracking turret and Selex ES Seaspray 7300E active electronically-scanned array (AESA) radar.

The Leonardo ATR-72MP is designed for intelligence, surveillance and reconnaissance (ISR) missions, but the aircraft platform can be weaponized. The Turkish Navy ATR-72-600 Turkish MPA (TMPA) is equipped to carry anti-submarine warfare (ASW) torpedoes from two hardpoints attached to the fuselage. Pakistan contracted Rheinland Air Service to configure its ATR-72 MPAs for ASW.

Considering the evident potential of the ATR-72MP, Leonardo, in its press release for the 2017 Langkawi International Maritime and Aerospace Exhibition (LIMA) in Malaysia, stated that it “envisions significant export opportunities for the aircraft … due [to its] low cost of operation, ease of maintenance and exceptional versatility in a number of maritime roles.”

A military platform at heart, the Airbus DS C295 is also a strong case for regional MPA needs. Like the ATR-72MP, the C295 MPA is capable of maritime ISR as well as ASW. It can also be armed with anti-ship missiles (AShM), provided well-rounded MPA capabilities.

While fewer C295s have been built thus far, the C295 platform can embrace many special mission roles, such as in-flight refuelling (IFR), airborne early warning and command (AEW&C), close air support (CAS), and tactical transport. Airbus DS can position the C295 as a universal base platform, one militaries can standardize upon to accomplish different requirements.

Airbus DS and Leonardo have respectable platforms to offer, and the cost-sensitive market, especially in developing world countries in need of modern MPA solutions, should be a lucrative area.

That said, while Airbus DS and Leonardo will benefit from the manufacturing of the C295 and ATR-72, respectively (though Airbus DS also owns 50% of ATR), the subsystems channel could see the active entry of outside parties. As shown with the Turkish and Pakistani ATR-72 MPAs, one need access to the requisite expertise, subsystems and weapons to configure special mission aircraft. These parties will compete with Leonardo’s Selex and other electronics branches for the MPA and ISR aircraft market.