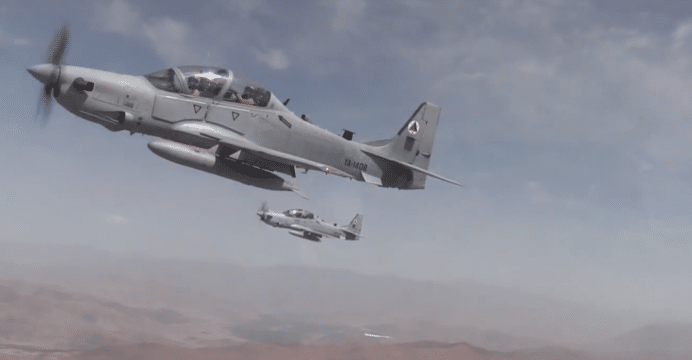 The AAF was slotted to receive a total of 20 A-29s under a U.S.-funded $427 million program. Besides A-29 aircraft, the program also involves training AAF aircrew in the U.S. at Moody Air Force Base, Ga. All A-29s are scheduled to be delivered by 2018.

The first four aircraft were delivered in January 2016, followed by a subsequent four in March 2016. The AAF began deploying the A-29s for CAS missions in April 2016, where it undertook guided strikes against Taliban as well as ISIS insurgents in various parts of Afghanistan.

The A-29 has a payload of 1,550 kg – available through five external hardpoints – and can use laser-guided bombs, rockets and missiles, INS/GPS-guided bombs, and unguided munitions. It also carries a 20-mm cannon and a 12.7 mm machine gun under each wing. The Super Tucano is powered by a Pratt & Whitney PT6A-68/3 turboprop engine, providing a cruise speed of 520 km/h.

With U.S. support, the Afghan National Defence and Security Forces (ANDSF) is being modernized along modern – and counterinsurgency-focused – lines. Besides the A-29, the AAF has also procured 27 MD-530 lightweight utility helicopters to provide light attack and scouting/reconnaissance support.

The AAF is a current case involving the use of lightweight CAS aircraft to undertake COIN missions, largely in low anti-air warfare (AAW) threat environments. The United Arab Emirates (UAE) has been undertaking similar operations in Yemen and Libya, but with IOMAX Archangels.

Egypt and Turkey will be joining the ranks of lightweight CAS aircraft operators with the IOMAX Archangel and Turkish Aerospace Industries (TAI) Hürkuş-C, respectively.

The use of these platforms in COIN environments has been contentious. While these aircraft are less costly to fly, not all analysts are convinced of the long-term viability of these aircraft. There is a concern that non-state actors could grow in their AAW capabilities, and that aside, one might point to the sunk cost of having these platforms in times without COIN operations.

However, the reality of COIN is not clear-cut. As shown in Pakistan, one can never project as to when COIN operations would end, and the spectre of it returning – as seen in Turkey – can loom indefinitely. While there is a risk of sunk costs for maintaining such platforms when they are unnecessary, there is also the cost of utilizing one’s fast-jets in COIN. The Pakistan Air Force (PAF) is not only spending on the fuel to have its F-16s and JF-17s engage in airstrikes, but it is also eating into the airframe lives of these aircraft. This may not be an issue over a short-term campaign, but in a protracted COIN environment, especially one that has been taking place for more than a decade, the sunk cost argument may not be valid.

Defensibility against AAW is a different issue. If a combat environment is deemed to have a genuine AAW threat, especially with infrared-guided missiles, then the CAS platform space might need to move to faster and higher flying aircraft. Lightweight jet aircraft could form the basis of such systems. Alternatively, or in conjunction, longer range air-to-ground munitions could be sought as well.

In general, it appears that the industry will be providing the lightweight CAS aircraft concept attention in the foreseeable future. The approach may adjust, but the goal of a low-cost aircraft capable of deploying the same munitions as an F-16 will stay.