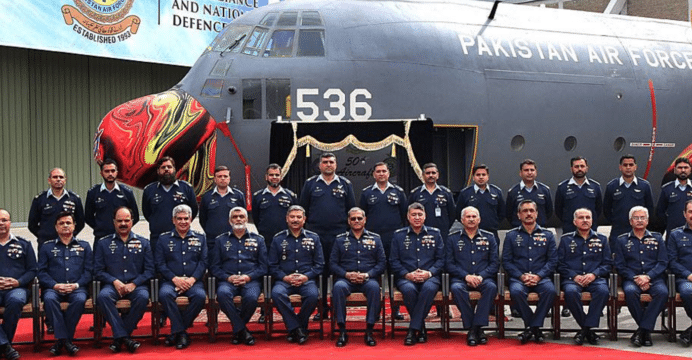 In a ceremony, the PAF Chief of Air Staff (CAS) Air Chief Marshal (ACM) Sohail Aman noted that the C-130 is an integral component of the PAF fleet and that it had also served in the country’s counterinsurgency (COIN) campaign in the Federally Administered Tribal Areas (FATA).

The PAF operates 5 C-130B and 11 C-130E. The Hercules is the PAF’s mainstay cargo and utility transport aircraft since the 1960s, resulting in an operational history of more than 50 years.

In March 2014, the PAF requested a service life-extension plan (SLEP) for the aircraft from the U.S., which was valued at up to U.S. $100 million. The SLEP comprises of “avionics upgrades, engine management and mechanical upgrades, cargo delivery system installation and [for six aircraft] replacement of outer wing sets.” In January 2016, the PAF issued a $30.7 million contract for new avionics suites for the 16 C-130B/Es.

Besides transport tasks, the PAF had also used the C-130 in intelligence, surveillance and reconnaissance (ISR) missions over FATA. The PAF integrated a FLIR Systems Star SAFIRE III electro-optical and infrared (EO/IR) pod and BRITE Star II laser designator to the C-130’s nose, and configured a command suite in the cargo area to coordinate the C-130’s ISR tasks with the PAF’s F-16s, with the latter relying on the C-130 to guide (via the BRITE Star II) Paveway laser-guided bombs (LGB).