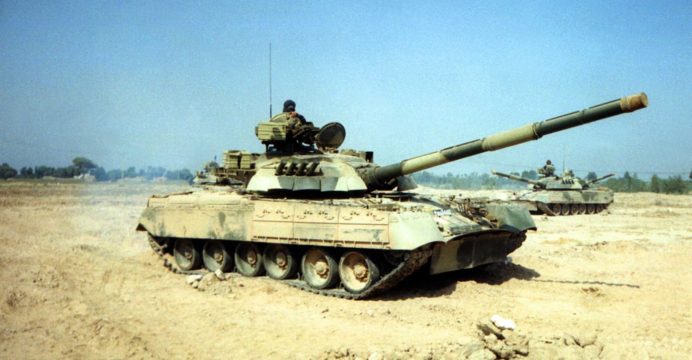 Pakistan and Ukraine have begun implementing their recently concluded memoranda-of-understanding (MoUs) for collaboration and support in armour programs.

As per Ukraine News Agency Interfax, the Ukrainian industry will supply 88 tank sights to Pakistan as well as support Heavy Industries Taxila in overhauling the Pakistan Army’s T-80UD main battle tanks (MBT). This will start with a pilot program covering five T-80UDs.

In November 2016, Pakistan and Ukraine signed a $600 million MoU for the supply of 200 diesel engines for al-Khalid 1 MBTs and technical support for the maintenance and modernization of other Pakistan Army tanks and armoured vehicles. This was followed up with another MoU in February which reportedly had Ukraine and Pakistan agree to the co-production tank engine parts.

The Kharkiv Morozov Machine Building Design Bureau (KMDB) Oplot-M was slotted as a candidate for the Pakistan Army’s Haider MBT program (the status of the Haider MBT is not known). The Oplot-M is a vastly modernized version of the T-84, which itself is an advancement of the T-80UD.

This appears to be the start of the initial MoU (from November). The extent of Pakistan’s T-80UD upgrade program is not known, but the order for 88 sights may indicate an intent to bring the T-80UD to Oplot-M standards. The Oplot-M uses a panoramic thermal-imaging sight, which is attached to the turret.

It is not known if Heavy Industries Taxila (HIT) will replace the T-80UD’s turret, like it had with the T-59 to al-Zarrar upgrade. However, the pilot-run may suggest that this is a relatively significant and upgrade.