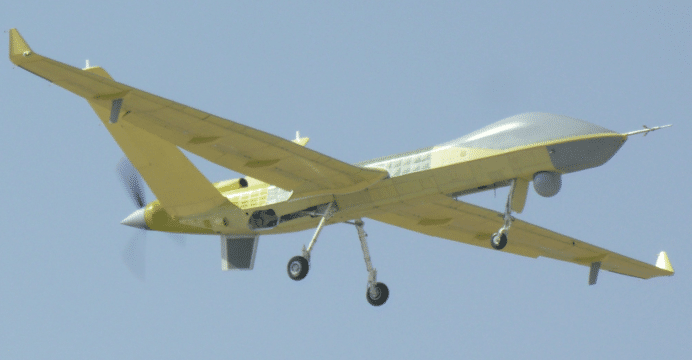 The Wing Loong II is an improved variant of the Wing-Loong (also designated Pterodactyl-I) medium-altitude long-endurance (MALE) UAV, which first flew in 2007. CAIG has marketed the Wing-Loong as an armed and intelligence, surveillance and reconnaissance (ISR) platform.

CAIG formally unveiled the Wing-Loong II during Air Show China in November 2016. As per IHS Jane’s, the Wing Loong II has a payload of 400 kg, which can be used for armaments and/or ISR equipment. The Wing-Loong II can reach a top speed of 370 km/h and service ceiling of 9,000 m. It has an endurance of 32 hours.

While observers have noted that the Wing-Loong II bore a strong resemblance to the MQ-9 Reaper, the Wing Loong II is a smaller and lighter platform than the Reaper.

Li Yidong, the chief designer of the Wing-Loong platform, celebrated the event by stating that the Wing Loong II’s test flight “marks China’s new generation reconnaissance and strike [drones].” Yidong added that China is among a handful of countries to field large strike-capable UAVs.

The Wing Loong is one of several Chinese UAV platforms available on the market. Its main competitor is the China Aerospace Science and Technology Corporation (CASC) Rainbow-series, namely the CH-4B.

In tandem with the Wing-Loong II’s test flight, China also announced that it secured its largest UAV sale to an undisclosed foreign customer. In September 2016, Arab News reported (from Al-Watan) that Saudi Arabia ordered an undisclosed number of Wing-Loong UAVs. In June 2016, a Wing Loong UAV crashed in Pakistan, with Pakistani authorities stating that the UAV was undergoing an “experimental flight.” Egypt and Kazakhstan have also been linked as Wing Loong users.

CAIG’s Wing Loong II will likely compete against the CASC CH-4B, which has a similar performance profile as the Wing Loong II with a payload of 345 kg and endurance of up to 40 hours. Iraq is a CH-4B operator.

The purported Saudi Wing Loong sale notwithstanding, Pakistan could be slotted as a strong candidate for new UAVs. It currently operates an array of tactical designs, such as the CH-3A-based Burraq, which is lighter in payload and range than CASC and CAIG’s newer designs. In fact, Pakistan was evaluating a Wing Loong in 2016, indicating that the Pakistani armed forces are seeking true MALE UAV platforms. Pakistan’s private sector conglomerate Global Industry & Defence Solutions (GIDS) is eager to develop a MALE UAV, provided it receives input and support from the Pakistani armed forces.