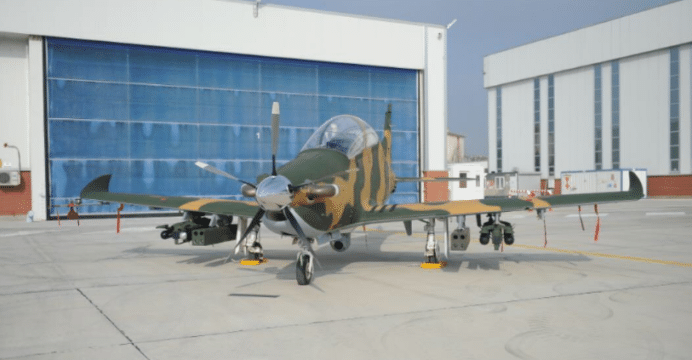 The Hürkuş-C is the armed variant of the Hürkuş turboprop-powered trainer, which flew in August 2013. TAI secured European Aviation Safety Agency (EASA) certification for the Hürkuş-A in July 2016, the civilian version of the Hürkuş platform.

As per the Turkish defence ministry, the Turkish Armed Forces (TSK) will have the Hürkuş-C in its inventory in 2018. Like its competitors, such as the Embraer A-29 Super Tucano and IOMAX Archangel, the Hürkuş-C is positioned to provide CAS coverage in low-intensity combat environments.

The Hürkuş platform is powered by a single Pratt & Whitney Canada PT6A-68T turboprop engine, which provides a power-rating of 1,600 shp and maximum speed of 574 km/h. TAI is aiming to supplant the PT6 with the domestically developed TUSAŞ Engine Industries (TEI)’s turboshaft engine.

The Hürkuş-C has a payload of 1,500 kg, which can be utilized through seven external hardpoints.

In the photos released by the Turkish MoD and TAI, the Hürkuş-C prototype was showcased with the Roketsan UMTAS anti-tank guided missile (ATGM), Roketsan Cirit laser-guided rockets, an electro-optical and infrared (EO/IR) pod (likely the Aselsan Common Aperture Targeting System or CATS), and external fuel tank.

The TSK’s apparent interest in the Hürkuş-C indicates that it is confident in using lightweight turboprop-powered attack aircraft in counterinsurgency (COIN) environments. This has been an increasingly common trend among air arms, especially in the developing world (i.e. Latin America and Sub-Saharan Africa). The U.S. Air Force is also examining the utility of these platforms for its own CAS requirements.

The main rationale for using Hürkuş-C-like platforms stems from the desire to lower the cost of air power, especially in low-intensity combat theatres where anti-air warfare threats are minimal, if not a non-factor.

In these areas, flying a fast-jet such as the Lockheed Martin F-16 could cost tens of thousand dollars per sortie (at minimum) to deliver precision-guided munitions. Those same munitions could be deployed from a Hürkuş-C-like aircraft for a markedly per-sortie cost of several thousand dollars, if not lower.

Commercially, the Hürkuş-C is vertically linked to the Turkish defence industry. The aircraft is supplied by TAI. Aselsan is likely providing the EO/IR solution via its CATS system, which can laser-designate targets at up to 25 km (to guide the UMTAS ATGM and Cirit rockets), and avionics. Roketsan is supplying the air-to-ground munitions. In time, the PT6A turboprop will be replaced by TEI’s engine.

In effect, Ankara has control over the Hürkuş-C, which should give it considerable flexibility in marketing the product, albeit in a saturated space (with the A-29 as the market leader).