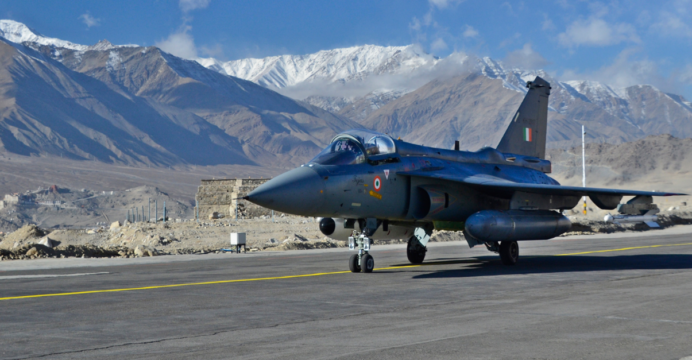 The Government of India has approved US $203 million for establishing a second production line for the Hindustan Aeronautics Limited (HAL) Tejas, which will help supplant the Indian Air Force’s (IAF) legacy MiG-21 and MiG-27 fighter aircraft.

The announcement was made during Aero India 2017 by Defence Minister Manohar Parrikar. Together, the two Tejas production line will annually roll-out 16 aircraft.

Although the IAF has sought requests-for-information (RFIs) for a new single engine multi-role fighter, which Saab and Lockheed Martin are competing to secure, Parrikar reiterated that the Indian government and the IAF remain “fully committed to the [Tejas].”

Sputnik News reports that the construction of the second production line will commence in three months.

The Indian government ordered 83 HAL Tejas in November 2016. The cost of purchase was set at $7 billion, which should include the aircraft and its requisite maintenance, logistics and training costs.

HAL is also floating a tender for active electronically-scanned array (AESA) radars for the forthcoming Tejas Mk-1A, and that too with transfer-of-technology for local manufacturing. The AESA radar program is to cost $1.85 billion for 100 radars.

Although the IAF is seeking another single engine fighter, that program is at least several years away from materializing into serviceable jets, the Tejas is available today.

The projected subsystem suite – i.e. AESA radars, likely AESA-based electronic warfare (EW) and electronic countermeasures (ECM) systems, and industry-leading air-to-air munitions in the Rafael Python and Derby – position the Tejas as a credible and potent solution, especially from a defensive standpoint of denying access to India’s airspace. India’s commitment to the Tejas is expected.

That said, the procurement of a new single engine platform – especially the Saab Gripen-E – may duplicate the solution that is an enlarged Tejas (e.g. Tejas Mk2). In terms of design, specifications and performance, the Tejas Mk2 would essentially be in the same exact space as the Gripen-E.