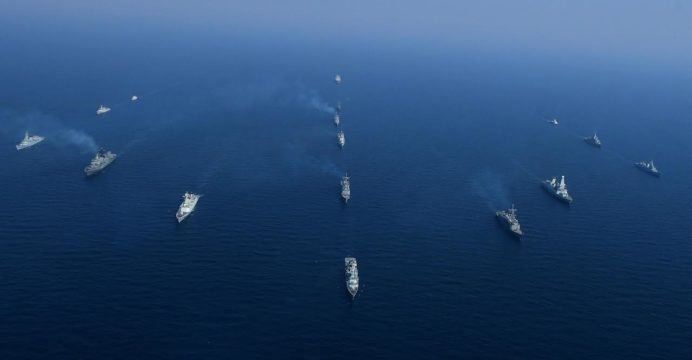 Pakistan has concluded AMAN-17 (or AMAN 2017), a major multi-national naval exercise that involved more than 35 countries, on Tuesday, 14 February 2017.

As per Inter Services Public Relations (ISPR), AMAN-17 ended with maneuvers at-sea and a Fleet Revie in the Arabian Sea. Besides naval exercises, AMAN-17 also included a major event – i.e. the International Maritime Conference – as well as a series of seminars, discussions and ship visits.

While AMAN is not a new exercise, AMAN-17 was notably large, perhaps the largest of any single Pakistani military exercise in recent years. The Pakistan Navy used AMAN-17 to help drive Pakistan’s foreign relations efforts, namely by promoting the Navy’s participation in multi-national security initiatives (such as Combined Task Force-150 and 151) or Pakistan’s expanding rapprochement with Russia.

However, an exercise of this scale is costly, and with Islamabad and Rawalpindi enabling the Pakistan Navy to implement AMAN-17 at this scale could indicate that the Navy’s prominence has grown.

The driving force behind this surge stems from two sources: Rawalpindi assigning strategic deterrence tasks to the Navy, thus necessitating SLCMs and submarines to carry them. Second, and more importantly, the China-Pakistan Economic Corridor (CPEC) and the need to guard the infrastructure investments made in Gwadar and, in time, the trade that is projected to flow from and to Pakistan.

First, anti-access and area denial (A2/AD), which is to deny an adversary access to Pakistan’s coasts, not just in terms of using Sindh or Baluchistan to enter the mainland, but to protect Pakistan’s coastal infrastructure, such as ports and shipyards. The main bulk of the Navy’s procurements – i.e. its submarines, FAC and coastal anti-ship missile (AShM) batteries – are centered on A2/AD.

Cumulatively, these programs would amount to several billion dollars in procurement expenditure, which is the largest funding package ever allocated for the Pakistan Navy.