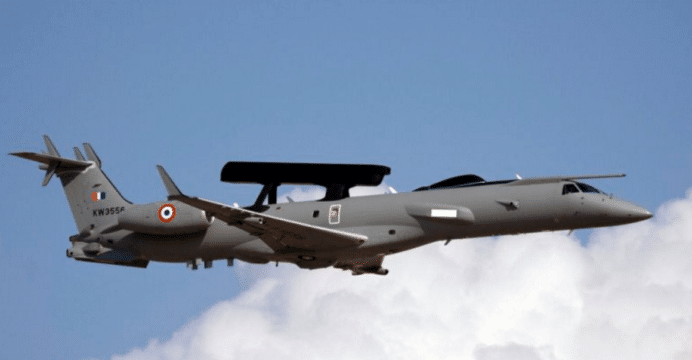 As per India’s Ministry of Defence (MoD), the Netra is a complete system centered on an active electronically-scanned array (AESA) radar developed by DRDO’s Centre for Airborne Systems (CABS). IHS Jane’s reports that the Netra has a range of 250-375 km with 240-degree coverage.

The AEW&C system also comprises of communications systems enabling for line-of-sight (LOS), beyond LOS communication, and voice communication. It has a secondary surveillance radar and “electronic and communication countermeasures.”

The Netra uses a software engine fusing information gleaned from sensors, providing the user with a comprehensive understanding of the combat environment.

The Netra system is mounted the Embraer ERJ-145 business jet, which DRDO equipped with a standard self-protection suite and in-flight refuelling probe.

At a press conference at Aero India, DRDO’s Chairman, Dr. S. Christopher, told media that each AEW&C would cost US $400 million a unit (via Defense World).

In tandem to procuring the ERJ-145-based Netra, the IAF is also setting in motion its plans for a next-generation AEW&C, with Airbus Defence & Space (DS) expected to supply the platform.

The completion and delivery of the CABS AEW&C is a significant step for the Indian defence industry and the Indian armed forces. Localization of sensitive technologies, such as AESA TRMs, has enabled India to absorb the bulk of defence expenditure within its own economy, enabling it to save substantially by using its own currency and cost dynamics. It is possible that with additional procurement, not just of the AEW&C but the underlying technology as well, will enable India to reduce the cost of the system. It should not be long before an export variant of the Netra becomes plausible, which will enable India to compete against Saab and Israel Aerospace Industries in many prospective markets.